Shubman Gill settled the debate for the opener's slot with a coming-of-age doubled hundred before India survived Michael Bracewell's blitzkrieg to pull off a nervy 12-run win over New Zealand in the first ODI of the three-match series here on Wednesday. 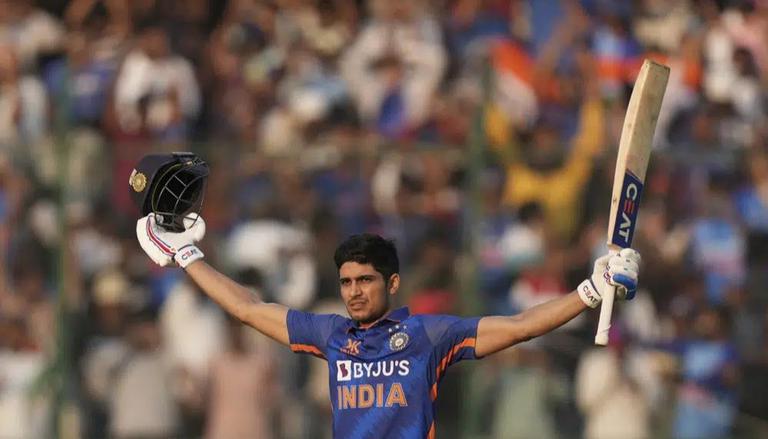 
Shubman Gill settled the debate for the opener's slot with a coming-of-age doubled hundred before India survived Michael Bracewell's blitzkrieg to pull off a nervy 12-run win over New Zealand in the first ODI of the three-match series here on Wednesday.

Gill oozed class in his special 208 off 149 balls and batted through the innings to power India to 349 for eight. Skipper Rohit Sharma's 34 off 38 was the second-best score of the innings, highlighting that it was very much a one-man show.

Chasing a big target, New Zealand were down and out at 131 for six before Michael Bracewell (140 off 78) came up with up a stunning century to bring his team back in the game from nowhere.

Playing in front of his home crowd, pacer Mohammed Siraj (4/46) produced a match-winning effort to stop New Zealand, who ended at 337.

After India opted to bat, the 23-year-old Gill owned the stage and became the youngest batter to score a double hundred in ODI history. By doing so, he broke the record of Ishan Kishan, who was controversially dropped for the Sri Lanka ODIs after smashing a double ton in Bangladesh last month.

Gill, who was touted as the next big thing in Indian cricket ever since he displayed his talent in the 2018 U-19 World Cup, hammered 19 fours and nine sixes, six of them coming after his 150. The double century was also his second successive three-digit score.

After India opted to bat, it was a good contest between the openers and New Zealand pacers as the hosts reached 52 for no loss in the first 10 overs.

Rohit once again promised a big hundred but was flattered to deceive.

Lockie Ferguson was generating serious pace as usual from one end but after getting lucky with a mistimed pull in the fourth over, Gill produced a crisp cover drive to deny him a maiden in his following over.

Having scored three hundred in his last four innings, Kohli began with a crunchy cover drive before being undone by a beauty from left-arm spinner Santner.

Kishan, who was accommodated in the middle order after missing out against Sri Lanka, too did not last long as he edged an angled delivery to wicketkeeper Tom Latham.

At the other end, Gill brought up his fifty with a slog sweep of off-spinner Bracewell that went all the way. The stylish opener also got a life on 45 when Latham fluffed a straightforward stumping off Bracewell with Gill expecting the ball to turn.

That was all the stroke of luck that Gill had as he did not look back from thereon. He unleashed his signature pull shots off the pacers while using his feet against the spinners.

He pulled Santner to get to 99 before reaching his third ODI hundred with a single. He reserved his best shot for the post-century celebrations as he whipped a full delivery from Tickner between mid-wicket and mid-on.

After Suryakumar Yadav's departure, Gill shared a 74-run stand with Hardik Pandya (28) who got out in a rather bizarre fashion.

As India cruised towards 300, Gill reached 150 with a six over deep mid-wicket off Bracewell. After that milestone, he went berserk and reached 200 with three huge sixes off Ferguson in the 49th over.

What was astounding was Gill's ability to hit straight sixes.

New Zealand had a mountain to climb.

Siraj provided the first breakthrough in front of a packed home crowd as his well-directed short ball got big on Devon Conway (10).

Conway's opening partner Finn Allen (40) played some enthralling strokes but fell to a brilliant catch in the deep from Shahbaz Ahmed off Shardul Thakur.

Kuldeep Yadav was impressive once again as he got rid of Henry Nicholls with a perfect wrong one before trapping Daryl Mitchell in front of the stumps with the conventional incoming delivery.

With New Zealand struggling at 131 for six in the 29th over, the game looked over before Bracewell played a knock to remember. He toyed with the Indian attack, smashing 12 fours and as many as 10 sixes. He took the team to the brink of a famous win before falling short.

The second ODI of the series will be played in Raipur on Saturday.