Sean Whitehead returned with the figures of 10/36 while bowling for South Western District in the second innings of their four-day match against the Easterns. 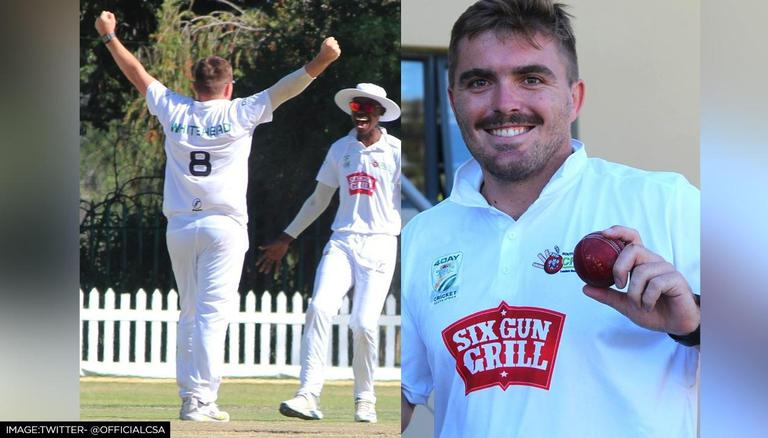 
South African cricketer Sean Whitehead achieved an incredible milestone while playing for the South-Western District in the Division 2 match of the 4-Day Franchise Series against the Eastern Storm on Saturday. Whitehead dismissed a total of 10 batters of Easterns in their second innings of the match and returned with the figures of 10/36 by restricting Easterns on a below-average score of 65, while they were chasing a target of 186 runs in Oudtshoorn. He dismissed two batters by bowling them out, had four batters caught by the fielders, before dismissing three batters by lbw and one batter by a caught and bowled.

🔟 OF THE BEST 🤯 @swd_cricket spinner Sean Whitehead claimed a brilliant 10/36 in 12.1 overs in the second innings of his side's #4DaySeries match against @EasternsCricket

He also bagged 5/64 in the first innings to set a new SWD First-Class record of 15/100 👏#BePartOfIt pic.twitter.com/bneDh7l4Rs

Earlier in the Easterns’ first innings, the 24-year-old left-arm spinner dismissed five batters after giving away 64 runs and finished the match with the bowling figures of 15/100. Whitehead also contribute with the bat by scoring 66 and 45 runs for the South Western Districts as they went on to clinch a 120-runs victory in a dominating fashion. Eastern Storm, earlier led the match by eight runs following the first innings, as South Western Districts recovered from 5-3 in the first innings to go on and score 193 runs, with Easterns requiring 186 runs to win.

Sean Whitehead’s figures of 10/36 in the Easterns’ second innings are the second-best figures in the history of the Proteas domestic cricket. The best figures were achieved by Bert Vogler for the Eastern Province against Griqualand West in Johannesburg, where he returned with 10/26 back in December 1906. Whitehead became the first bowler in South African domestic cricket after seamer Mario Olver to dismiss 10 batters in an innings. Oliver returned with 10/65 for the Warriors while playing against the Eagles in December 2007.

Having returned with 15 scalps from the match against Eastern’s Whitehead has now 39 wickets in a total of 13 matches that he has played. At the same time, he has also scored 481 runs so far at an average of 37.00, showcasing his all-round talent.He previously represented South Africa in the ICC Under-19 World Cup 2016 in Bangladesh, and returned with a total of six wickets from the tournament, after playing all six matches. He is known for his left-arm orthodox bowling and bats with the right hand.