Some leaders have appealed to the Centre to reconsider playing against Pakistan, while some also voice to strengthen diplomacy. Here is who said what- 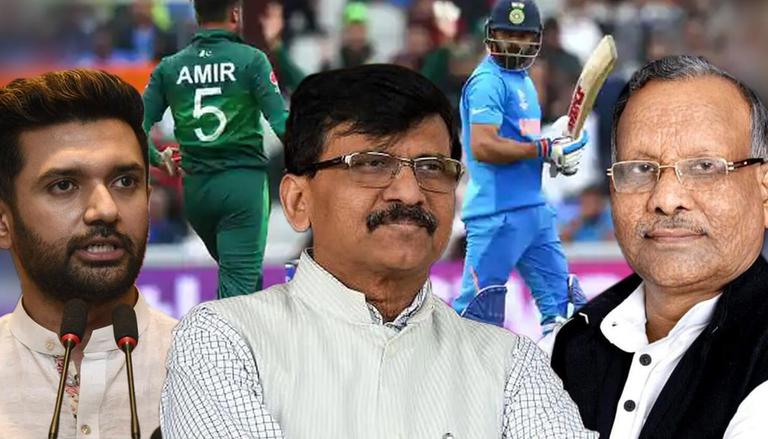 
At a time when targetted killings are on surge in Jammu and Kashmir by the Pakistan-backed terrorists, a huge debate has sparked whether Team India should play against Pakistan in the T20 World Cup or not. The following started after Arbind Sah, a non-local, was shot dead in Srinagar on Saturday, and his father demanded that India should call off their T20 World Cup game against Pakistan in protest against the targeted civilian killings in the Valley.

Now, various political leaders of India have started to give their opinion on whether India should play the T20 match against Pakistan or not. Some leaders have appealed to the Centre to reconsider playing against Pakistan, while some also voice to strengthen diplomacy.

Political leaders and their opinions on India vs Pakistan match

Union Miniter Giriraj Singh was among the first to respond to India vs Pakistan match debate. “I think if relations (between India and Pakistan) are not good then this should be reconsidered,” Singh said when asked if India vs Pakistan match should take place in the wake of targeted killings in Jammu and Kashmir. The high-octane clash between India and Pakistan will take place on October 24 in Dubai, as India eyes reclaiming the World cup.

READ | Who is Curtis Campher? All about Ireland bowler who took 4 wickets in 4 balls at T20 WC

Shiv Sena MP Sanjay Raut said, "We have always said not to keep any type of relations with Pakistan. Our people are being killed and you are talking about cricket?". Sena has been in the forefront of opposing Indo-Pak cricket matches amid strife - most notably when they dug up Mumbai's Wankhede pitch in 1991, repeated the same in Delhi's Ferozshah Kotla in 1999 and in UP's Agra in 2003.

Congress leader PL Punia too backed the demand to not play against Pakistan in T20 World Cup. Punia said, "In the current scenario when terrorist incidents are rising at that time the India-Pakistan match at T20 World Cup does not seem relevant to me."

Bihar Labour Minister Jivesh Mishra asked for a discussion on ongoing India vs Pakistan T20 World Cup match debate. Mishra said, "In such matters, discussions should take place that if they don't want pace then there is no use of playing cricket with them."

Member of Lok Sabha Chirag Paswan on the other hand backed India vs Pakistan match at T20 World Cup and opined that the Centre should bolster their diplomacy to send a stern message to 'terrorist backing countries'.

"Sports, music, movies, and arts are beyond the borders. I don't support that banning playing will improve anything. I think our diplomatic and political policy should be more strict through which we can send a stern message to countries who support terrorism," said Chirag Paswan.

On the other hand,  Deputy CM of Bihar Tarkishore Prasad said, "PM Modi is keeping a close watch on all the developments and in terms of my point of view that Pakistan is trying to spread terrorism in India then such types of things (India-Pakistan match) should not take place."

Meanwhile, BCCI vice president Rajeev Shukla backed the India vs Pakistan T20 World Cup match, telling reporters on Monday that 'commitments' had been made which could not be backed out of.

We strongly condemn killings(J&K). Strict action should be taken against terror orgs. As far as match (T20 WC IND vs PAK) is concerned, under ICC's int'l commitments you can't refuse to play against anyone. You've to play in ICC tournaments: Rajeev Shukla, BCCI VP&Congress leader pic.twitter.com/IPbhu9onGH

"I strongly condemn these killings, strict action needs to be taken against these terrorist organisations. As far as the match is concerned, you know that commitments are made under the ICC. Under these, we can not refuse to play. In ICC tournaments, you have to play," Rajeev Shukla said.