India will be locking horns with Australia and England in ICC Men's T20 World Cup 2021, the warm-up games on October 18 and 20, respectively. 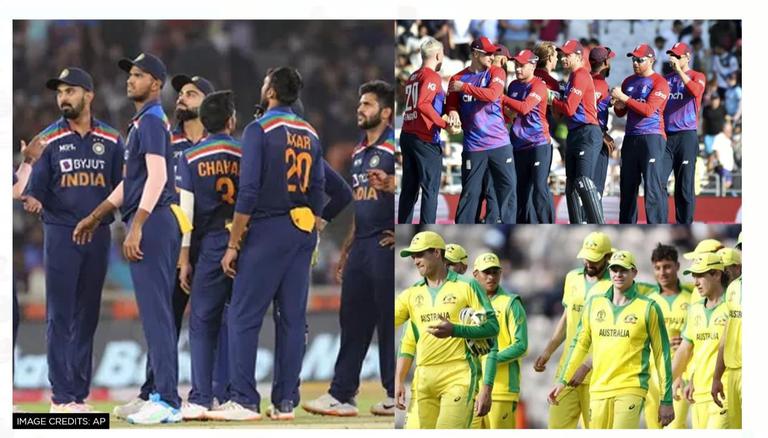 
Before kickstarting their campaign in the T20 World Cup against arch-rivals Pakistan, Virat Kohli-led India would square off against England and Australia in warm-up games. The match against England would take place on October 18, while the game against Australia would go ahead on October 20.

Speaking to ANI, industry sources confirmed the same. "Yes, India will lock horns against England and Australia in warm-up games and they will be telecast on Star," the source said.

Team India will begin their ICC T20 World Cup 2021 campaign against arch-rivals Pakistan in Dubai on October 24.
The seventh edition of the ICC Men’s T20 World Cup will be contested in the United Arab Emirates (UAE) & Oman from October 17 to November 14. In the hallmark fixture of the group stage, India and Pakistan are set to lock horns in Group 2. Other teams in Group 2 comprise New Zealand, Afghanistan, and the other two qualifiers from Round 1. Eight teams will contest the first round including automatic qualifiers Sri Lanka and Bangladesh with the remaining six who booked their spot through the ICC Men’s T20 World Cup Qualifier 2019. Ireland, Netherlands, and Namibia join Sri Lanka in Group A, whilst Oman, PNG, and Scotland will face Bangladesh in Group B.

Meanwhile, England, Australia, South Africa, and the reigning champions West Indies have been placed in Group 1. In the meantime, the winners of Groups A and B from Round 1 of the T20 World Cup qualifiers will be assigned to Groups 1 and 2, respectively. Group A and B runners-up will be assigned to Groups 2 and 1, accordingly. The top eight teams in the ICC T20 standings have already qualified for the Super 12 round, while the bottom eight will vie for the final four berths.

READ | Virat Kohli knew he would be removed from ODI captaincy if India fail at T20 WC: Report