'This Will Put A Smile On So Many': Twitter Hails Sri Lanka For Galle Test Win Amid Crisis

Fans not only celebrated Sri Lanka's victory but also hailed the cricketers for their effort during testing times in the middle of country's economic crisis. 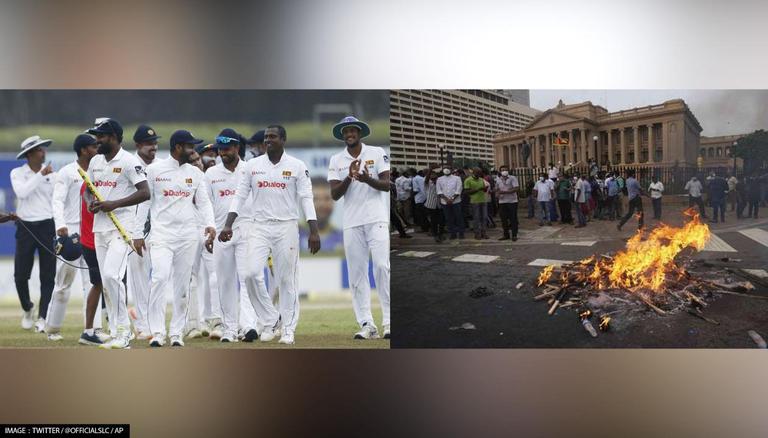 
Amid the ongoing crisis in Sri Lanka, the cricketers brought some cheers to their home fans as they won the Galle Test to level the two-match Test series against Australia. Concerns were raised during the match with protestors reaching the fence of Galle Cricket stadium, however, the contest went ahead without much trouble as Sri Lanka beat Australia by an innings and 39 runs.

The Sri Lanka vs Australia second Test saw hosts showcasing absolute dominance with a 10-wicket loss to Australia in the first Test. Dinesh Chandimal scored an unbeaten double century which helped the team take a huge lead in the contest, while Prabath Jayasuriya produced an incredible spell in the second innings which helped the hosts clinch the Galle Test. Fans not only celebrated Sri Lanka's victory but also hailed the cricketers for their effort during testing times in the middle of country's economic crisis.

Thank you for your coverage of not only the cricket but the whole country as well. 🇱🇰We deeply appreciate everything you, your coverage team and the Aus team did. Greatly contested series. Hoping you had a lovely time as well. Safe journeys and always welcome back 🇦🇺

Again, what’s Sri Lanka’s cricketers are doing is so inspiring!!!!!

What a shame it isn’t a 3 Test series. Sri Lankans have had a tough time. This result will put a smile on so many in their beautiful country. @cricketcomau @OfficialSLC 🏏

Congratulations to Dinesh Chandimal on your test double century.
An amazing effort to score over 200 runs in one innings in notoriously difficult sub continent conditions.
Well played👏🏽👏🏽 #SLvAUS

That is an all-time performance from Sri Lanka. Their country in turmoil, the privations nationwide, their belting from Australia in the first Test, their ranks of covid absences, and they turn around to win by an innings with a mix of determination and flair. Wonderful. #SLvAus

Australian skipper Pat Cummins won the toss during Galle Test and elected to bat first. The visitors were able to post a good first innings total of 364 runs courtesy of centuries from Steve Smith (145*) and Marnus Labuschagne (104), respectively. The bowling attack of Australia looked good in the first Test and was expected to dominate Sri Lanka batters in the first innings but the host decided to fight back with Dinesh Chandimal making major contribution.

With Pathum Nissanka ruled out due to COVID-19, the other batters showed heart against Australia's bowling attack. Dimuth Karunaratne (86), Kusal Mendis (85) and Angelo Mathews (52) laid the foundation for other Sri Lanka batters to post huge total on board. Dinesh Chandimal grabbed the opportunity with both hands staying unbeaten on 206 runs and the innings turned out to be the difference-maker with regard to the outcome of the contest. Chandimal’s double century helped Sri Lanka reach a mammoth score of 554 and enjoy a huge first innings lead of 190 runs.

Australia's second innings was a disaster as batters failed to tackle the spin bowling of Prabath Jayasuriya. Making good use of the turning track Prabath Jayasuriya bowled a match-winning spell of 6/59. Maheesh Theekshana 2/28 and Ramesh Mendis 2/47 playe the supporting role to perfection as the visitors were bowed out for just 151. Marnus Labuschagne top-scored with 32 runs and besides him, none of the other batters could score 30 or more runs. The Sri Lankan victory has prevented Australia from registering a back-to-back Test series victory in the subcontinent.