Trent Rockets Keeper Stands Far Away From Stumps During Rashid Khan's Over; Know Why

Afghanistan spinner Rashid Khan was having an outstanding tournament for Trent Rockets in The Hundred having picked up 9 wickets from 115 balls bowled. 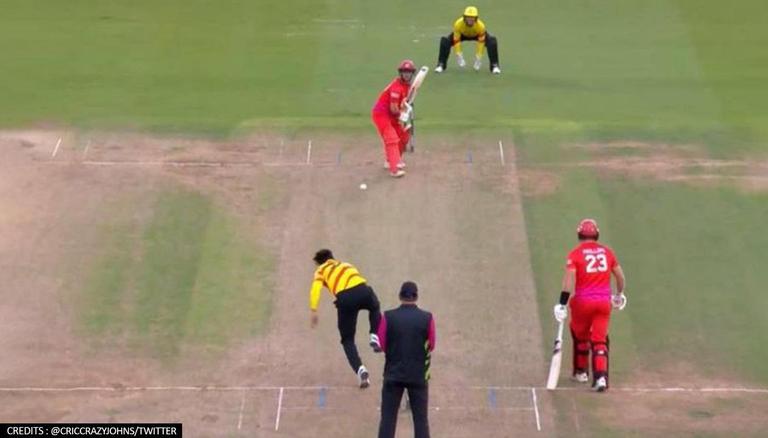 
Standing behind the stumps and keeping wickets is no easy job for any wicketkeeper and when the spinner takes centerstage, the job becomes more difficult.  A couple of days back, during the match between Trent Rockets and Welsh Fire in the Hundred Tournament one incident that caught everyone's eye was wicketkeeper standing far away from stumps when Rashid Khan was bowling.

Wicketkeeper stands far away from stumps during Rashid Khan's over

The wicketkeeper in the spotlight is Tom Moores who is playing for Trent Rockets in The Hundred tournament.  The wicketkeeper stood quite back behind the stumps when Rashid Khan bowled the first delivery of his spell. The image of the same went viral after being shared by cricket fans on social media.

Wicket-keeper was standing back when Rashid Khan was bowling the first ball of his spell. #TheHundred pic.twitter.com/zIRf4VXXH2

A Twitter user by the name of ‘Cricket with Ash’ tried to resolve the mystery, stating that the inexperienced Moores was perhaps nervously keeping the stumps for Rashid, whose variations – the ability to indecipherably mix his googlies with the leg-spinner – is world-renowned.

Looked like the keeper was so nervy and had no idea of his variations - guessing by the way he messed up one later, no clue. Also was the first ball of his spell, the very next ball he came up.

We've seen this before pic.twitter.com/hXzakhl7zj

Rashid Khan's performance in The Hundred

Rashid Khan is having an outstanding tournament so far picking up 9 wickets from 115 balls bowled so far.  He is just one wicket away from tying Adil Rashid's tally of 10 wickets so far. The best figure for the Afghanistan spin wizard in the tournament has been 3/26. Trent Rockets currently occupy the second spot on the points table with 8 points from 6 matches. The team has registered four wins and two losses to date. Trent Rockets next fixture is against Birmingham Phoenix on Friday, August 13.

Recently Rashid Khan while speaking to Cricket.com.au spoke about bowlers bowling two consecutive overs from one end to solve the slow overrate issues in BBL. The Afghanistan T20 skipper said, “Bowling two overs from one end, it is so good as it does not take that much time. It makes it easier as a fielder as well, that you don't keep changing and it's much much quicker. That's what I think this (100-ball) format is all about – everything happens quickly, it doesn't take so much time."