Ishan Kishan stunned the cricketing world with world record breaking 131-ball-210 against Bangladesh in Chattogram last month while 'SKY' has just scored his 3rd T20I hundred couple of days back in his 43rd innings. 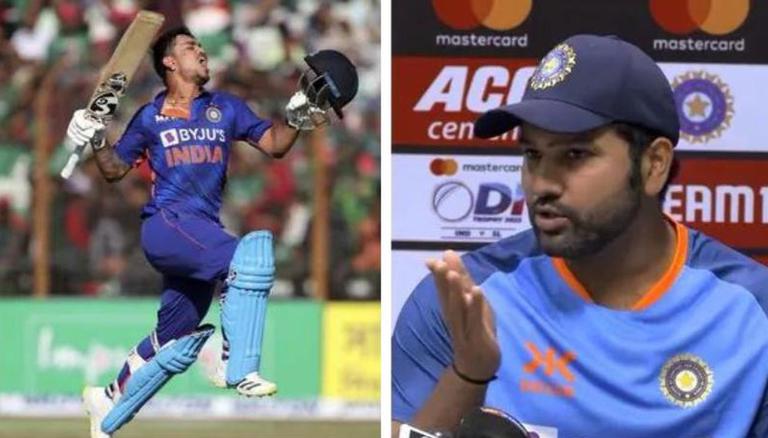 
Indian skipper Rohit Sharma on Monday made it very clear that Ishan Kishan despite his fastest double hundred in his last ODI will have to wait for his next chance just like Suryakumar Yadav, who is currently world's No. 1 T20 batter.

India will be playing six ODIs in next two weeks against Sri Lanka and New Zealand respectively, starting with first game against the islanders here on Tuesday.

Ishan stunned the cricketing world with world record breaking 131-ball-210 against Bangladesh in Chattogram last month while 'SKY' has just scored his 3rd T20I hundred couple of days back in his 43rd innings.

But Rohit was clear that Shubman Gill (named on record) and Shreyas Iyer (dropped broad hints) will get a long run in these six games.

"Both openers have done really well. But looking at how both openers have gone through, it's fair that we give Gill a chance to have a good run," Rohit said ahead of the first game.

In Gill's favour, his superb consistency -- 687 runs in 13 innings with 57 plus average and 99 plus strike-rate has gone in his favour.

"Gill has got a lot of runs in the last few games, so has Ishan. I am not going to take anything away from him (Ishan). He's been wonderful for us, got a double hundred. And, I know what it takes to get a double hundred, it is a great achievement," said Rohit, who is the only batter to have three ODI double hundreds.

"But just to be honest and fair to the guys who have done really well before, we need to give those guys enough chances as well before we make that call." Terming it unfortunate, Rohit said Ishan would get share of chances as they have 15 ODIs and the Asia Cup lined up before the World Cup in October-November.

"It's unfortunate that we won't be able to play Ishan. But looking at how things have panned out for us in the last eight-nine months and how the ODIs have gone through for us, it's fair to give Gill that run and he's done extremely well in that position.

But Rohit assured that Ishan remains very much in the mix.

"Yes, Ishan is certainly going to miss out but it is very unfortunate. But that does not rule out anything. We are going to try and keep everyone in the mix and see how it pans out for us as we play a lot of games ahead."

Rohit made it clear that form is important but so is the format and hence without naming indicated that Shreyas Iyer will make the cut in the playing XI.

"Those guys who have performed will get a run. It is as simple as that. Sometimes it's hard when we compare guys performing in different formats. I do understand the form. Form is important and so is the format," Rohit added.

A lot of it has got to do with saving head coach Rahul Dravid's favourite ward, the profligate KL Rahul. Rahul has been entrusted with the big gloves in order to save his place in the playing XI at No. 5 going into World Cup. This was decided even before Rishabh Pant endured a horrific car crash.

In the series-deciding T20I at Rajkot, Suryakumar smashed a 51-ball 112 not out to single-handedly steer India to a 91-run win and seal the series 2-1.

Rohit said it's important not to "mix up" the two white ball formats.

"Look, I think it's a great headache (choice between Surya and Shreyas) to have rather than having no headache. Honestly, we will look at the performance of the guys who have done really well. The problem happens when we start comparing different formats to different formats.

"ODI is a different format, slightly longer than T20I and we are very clear that the guys who have done well will definitely get the opportunities," the skipper's vote seemed to be in favour of Shreyas, who has two tons and 14 fifties from 39 ODIs at a strike-rate of 96.

"We are very clear about giving opportunities to the guys who have done really well. That is what is going to happen as we move forward, play these six ODIs. The guys who are doing well will also get a lot of opportunities." For Rohit, all those who have scored runs under difficult circumstances will be rewarded.

"We will have to look at who's done well in the ODI format for us, and in what situation they have done well. They've been under pressure and gone on to score runs. All those things we need to count before we make that call. This is something we're going to do before making that call -- to try and capture everything that has happened in the last eight-nine months.

Of the 15 ODIs, India play nine ODIs at home in next three months -- three each against Sri Lanka, New Zealand and Australia -- before the cricketers head to their respective IPL franchises.

And ahead of the World cup, India are slated to tour the West Indies and take on Australia at home for three ODIs each.

Then there's also the Asia Cup slated in September, the venue of which is yet to be decided.