After the recent confusion caused over his diet including eggs, Virat Kohli cleared the confusion, clearly stating that he had never claimed to be vegan. 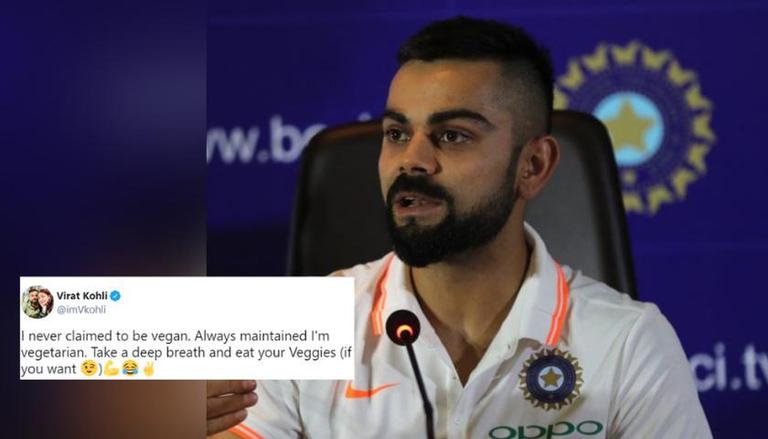 For years, fans have assumed that Virat Kohli either is vegan or vegetarian. In a recent Q&A session on Instagram, Kohli explained his diet, which had fans wondering how eggs were included in his diet if he was vegan or vegetarian.  The Indian cricket icon, however, insists that he is not vegan.

In quarantine before the WTC Finals in England, Virat Kohli decided to answer some fan questions on Instagram. The Indian cricket answered various questions, including one about his much-talked-about diet. However, fans remained more confused than ever over his answer.

Saw game changers on Netflix. Being a vegetarian athlete has made me realise what I have believed all these years regarding diet was a myth. What an amazing documentary and yes I’ve never felt better in my life after I turned vegetarian.

In an October 2019 tweet, Kohli spoke about becoming a vegetarian athlete. "Being a vegetarian athlete has made me realise what I have believed all these years regarding diet was a myth," he wrote, adding that he feels better after turning vegetarian. However, from 2018-2020, in a few interactions, Kohli claimed to have quit dairy and meat products due to his body turning more acidic, which could have made him injury-prone. He also claimed to have endorsed plant-based diet's benefits, having played the 2019 World Cup in England completely with it, having recovered faster for each game.

But the answer now to the 'Is Virat Kohli vegan?' query is clearly a no

I turned Vegetarian after Kohli did and the outcome is unreal 🔥. That's the best decision I have ever taken in my life. Thank you Idolo! 😍👍

Virat Kohli claims he is a vegan but in his latest AMA, he said his diet includes eggs. That's bothering me.

As a result, fans took to tagging Kohli on Twitter, asking why were eggs included in the Virat Kohli diet in the first place -

I never claimed to be vegan. Always maintained I'm vegetarian. Take a deep breath and eat your Veggies (if you want 😉)💪😂✌️

"I never claimed to be vegan. Always maintained I'm vegetarian," Kohli tweeted in response to all the doubts. He asked everyone to take a deep breath and eat their vegetables – that is, if one wants to. While fans' comments varied, a few asked Kohli as to how they categorize eggs as vegetarian.

What is Virat Kohli diet?

As per reports, Kohli only drinks Evian Natural Spring water, which is imported from France. The water is said to be chemical-free and helps with weight check, depression and clear skin. The Virat Kohli water price costs from ₹600 per litre to ₹36,000 per litre, and Kohli apparently spends around ₹4,38,000 on his water anually.