Virat Kohli was pictured outside his apartment building in Mumbai, where he reached from Ahmedabad a day after BCCI announced the postponement of IPL 2021 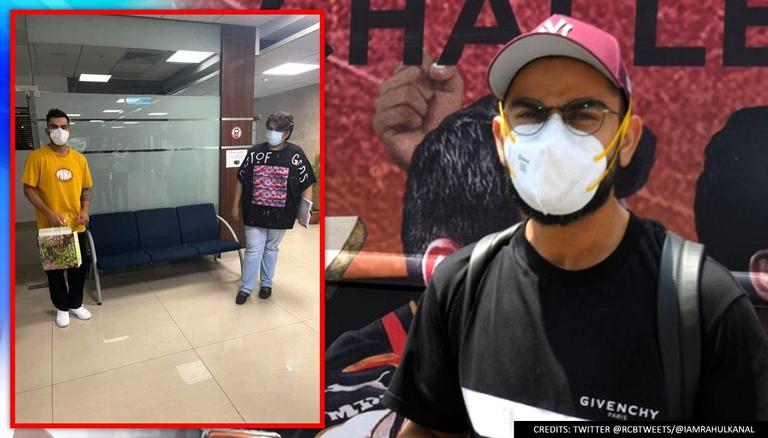 
Indian cricket team skipper Virat Kohli who also captains the Royal Challengers Bangalore has returned home after the suspension of the 14th edition of the Indian Premier League (IPL). Virat Kohli was pictured outside his apartment building in Mumbai, where he reached from Ahmedabad a day after BCCI announced the postponement of the IPL 2021. Now, just after a day reaching his home, Kohli has jumped into Covid-relief work as India is battling hard from the second wave of coronavirus.

Virat Kohli met Yuva Sena member Rahul Kanal in Mumbai as he proposed his plans on the behalf of his foundation which he spearheads alongside his wife and star Bollywood actor Anushka Sharma. Rahul Kanal on his Twitter handle shared his pictures with the Indian cricket team captain and revealed that Kohli has started working on COVID relief and he has respect for the cricketer.

Meeting our Captain...Respect and love for the movement he has started working on for COVID relief... No words just Respect and Prayers for all his efforts !!! @imVkohli 🙏 pic.twitter.com/qZEQEKzgM7

Kohli's team had moved to Ahmedabad after playing the first leg of the tournament in Chennai and then a couple of games in Mumbai. However, on Monday, ahead of their clash against Kolkata Knight Riders, the IPL confirmed that the match has been rescheduled after two players from the opposition camp tested positive for COVID-19. In terms of COVID, Kohli's team RCB had pledged to provide financial support to contribute for the infrastructure related to oxygen support to aid the country's fight against the deadly virus. Kohli & Co. had also planned on wearing a special blue jersey in solidarity with the country's frontline workers. However, the tournament came to an abrupt halt before the team could wear it for a match.

Meanwhile, India's former skipper and CSK's captain MS Dhoni is yet to return to his hometown Ranchi. As per multiple reports, Dhoni has opted to wait back in Delhi as he wants his teammates and coaching staff to depart first. The veteran wicket-keeper informed everyone at the franchise that he would be boarding the last flight.

New coronavirus cases and deaths in India hit a record daily high with 4,12,262 new infections and 3,980 fatalities being reported, taking the total tally of COVID-19 cases to 2,10,77,410 and the death toll to 2,30,168, according to the Union Health Ministry data updated on Thursday.

Registering a steady increase, the active cases have increased to 35,66,398 comprising 16.92 percent of the total infections, while the national COVID-19 recovery rate has dropped to 81.99 percent, the data updated at 8 am showed.