Virat Kohli shared a picture of himself and MS Dhoni at the end of India's successful run-chase against Australia in the World T20 2016 semi-finals in India.

He might have surpassed his predecessor in being the most successful Test captain but Virat Kohli reveres 'his skipper' MS Dhoni, the man whose wings under which then young Virat Kohli grew over the years. The number one ranked batsman in the world has always looked up to 'Captain Cool' and considers the veteran an essential ingredient of the Men in Blue for the expert advice on the field, providing all his cricketing knowledge and experience to aid Kohli, saving the day for Team India and of course the Dhoni Review System (DRS). Even during times when MS Dhoni has been severely criticised for poor shows, Virat Kohli has always stood by him and has reaffirmed on multiple occasions that MS Dhoni had a huge experience and that he knew what he was doing. The skipper and the ex-skipper have shared many valuable moments on-field, including some nerve-racking run chases. Virat Kohli took to Twitter to share a picture of one such chase that dated back to 2016.

The Indian skipper took to the micro-blogging website to share a picture of a moment of MS Dhoni and himself after India's successful run-chase against Australia in the World T20 semi-final The picture, etched forever in the hearts of the Indian fans, is that of Virat Kohli kneeling on the ground, exhausted as MS Dhoni scores the winning runs with a typical MSD finish, a boundary. Australia had set a target of 161 runs for the Men in Blue to chase in order to make it to the finals. Virat Kohli scored a magnificent knock of 82 runs to steer India home to victory. However, the run-chase went down the wire and it was none other than Captain Cool MS Dhoni who was there to finish the match off with Virat Kohli. Virat Kohli and MS Dhoni went on to put up a fifth-wicket partnership of 50 runs which came off 26 balls but it involved an incredible running between the field by both the batsman. MS Dhoni had pushed Virat Kohli at every possible moment to make a run or convert it into a double. As a result, at the end of the successful run-chase that saw India go on to the finals, Virat Kohli was kneeling on the ground, exhausted, as MS Dhoni hit the winning runs and watched on as the ball sailed to the boundary. 'A special night. A game to never forget. This man made me run like a fitness machine', wrote Virat Kohli on the micro-blogging website. See the tweet here: 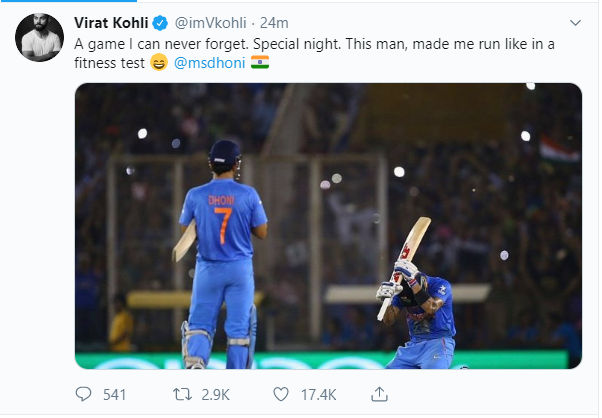 READ: Ashes: Squads for the final test match announced by both teams

All eyes on whether Dhoni will play Syed Mushtaq Ali Trophy

With 22 T20 International matches before next year's T20 World Cup in Australia, the selection committee wants to put a succession plan in place for the new panel, which will take charge as and when the BCCI elections happen. "The three choices as white-ball keepers are Pant, Sanju Samson and Ishan Kishan," the official said. But it is impossible to say what will happen when India have their next limited-overs assignment. All eyes will be on whether Dhoni plays the Syed Mushtaq Ali Trophy for Jharkhand. The tournament is scheduled from November 8 to December 1. If Dhoni is part of that, it would mean that he will play one more year of Indian Premier League for Chennai Super Kings.

READ: 'Steve Smith will always be remembered as a cheat': Steve Harmison