'Virat Kohli Will Be Seen In Same Role As Dhoni': Skipper's Childhood Coach

Virat Kohli's childhood coach Rajkumar Sharma supported his decision of stepping down as T20I captain after World Cup T20, to be held in the UAE. Read further. 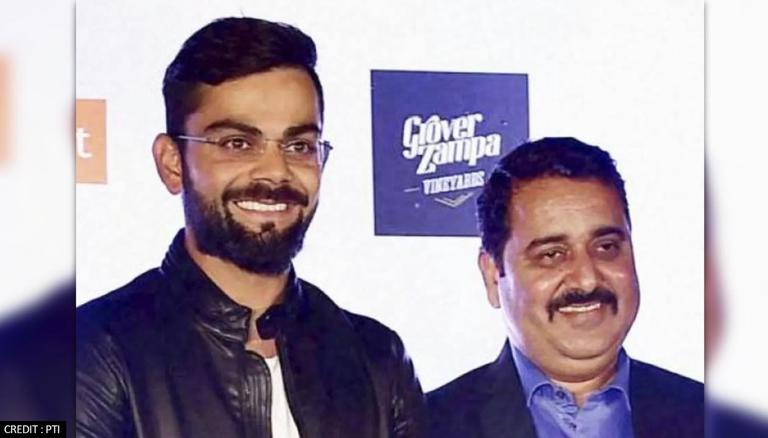 
Rajkumar Sharma, childhood coach of Indian skipper Virat Kohli, has reacted to his former student deciding to step down as T20I captain after the conclusion of the upcoming T20 World Cup in the UAE. Sharma, while speaking to news agency ANI, said now that Kohli has decided to step down as T20I captain, he will be more focused on winning the World Cup title for India as he will like to leave the captaincy on a high.

Sharma said that Kohli had spoken to him about leaving the T20I captaincy, adding "It's a thoughtful decision".

'Will ease off the pressure' says Virat Kohli's coach

Sharma further added that it would be interesting to see who is appointed the new captain because whoever is given the responsibility will bring new ideas and new strategies. Sharma said that he sees Kohli helping out the new skipper just as former Indian captain MS Dhoni did when the 32-year-old assumed charge in 2017, ahead of the ODI series against England at home. Sharma opined that captaining a cricket-loving nation like India in all three formats can take a massive toll on any player, adding that Kohli did the right thing to ease off the pressure and focus on what he loves the most - Test cricket.

READ | After T20s, Virat Kohli stepping down as ODI skipper unthinkable? These records suggest so

"New captain will bring new ideas and new strategies, so it will interesting to see who is named as the skipper. Just like what Dhoni did, Virat too will like to play the same role and help the new captain. He will be more determined and focused to win the T20 World Cup as he will want to leave India’s T20I captaincy on a high. It is a thoughtful decision, he had discussed with me also about this," Sharma was quoted as sauing by news agency ANI.

Virat Kohli on Thursday, September 15, announced that he will step down as T20I captain of the Indian team after the upcoming T20 World Cup. Kohli said he reached the decision after a lot of thought and discussions with "close people", including Team India head coach Ravi Shastri and vice-captain Rohit Sharma. The Delhi-born cricketer confirmed he will continue to lead the nation in Test and ODI formats, while he will play the shortest form as a pure batsman only. The BCCI later issued a statement supporting Kohli's decision. Rohit Sharma is currently first in line to replace Kohli as India's T20I captain.

WE RECOMMEND
Abhishek Singhvi defends Virat Kohli mocking England's Barmy Army; lists 'classless' acts
Virat Kohli only Asian captain to win T20 series in SENA countries; Highlights of career
5 Instances when Virat Kohli broke the Internet: How many do you remember?
'Top-quality cricketers': Virat Kohli heaps praise on RCB's new additions to the squad
Virat Kohli on 5th Test cancellation: 'Unfortunate how we ended up being here early'
Listen to the latest songs, only on JioSaavn.com