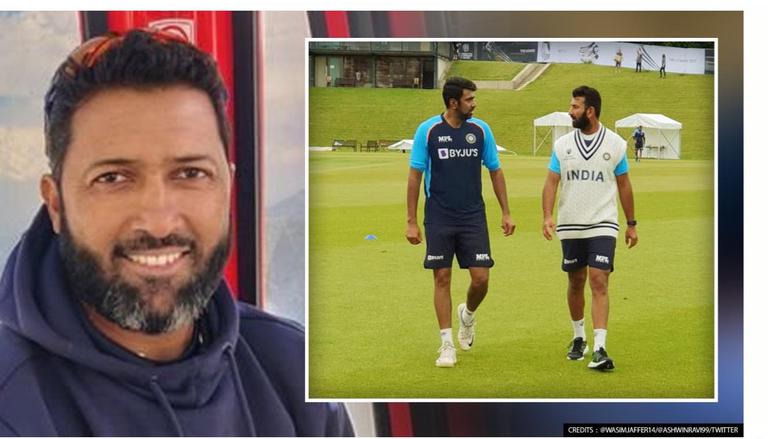 
Former Indian Test opener Wasim Jaffer has come up with a quirky as well as a unique reply to senior offie Ravichandran Ashwin just days ahead of the eagerly-awaited ICC World Test Championship (WTC) final.

The top two Test sides India and New Zealand will battle it out in a one-off Test match for the biggest prize in red-ball cricket at Ageas Bowl, Southampton next Friday.

It so happened that earlier R Ashwin had posted an image of him and India's Test batting mainstay Cheteshwar Pujara having a discussion on the ground. By the look of it, the seems that the duo was clicked during the Indian team's practice session.
Meanwhile, Ashwin went on to caption the picture as 'Prizes for guessing what @cheteshwar1 is telling me here!' with two laughing emojis.

The fans tried their level best to make it more entertaining. However, it was Wasim Jaffer who had the last laugh. The multiple-time Ranji Trophy winner came forward and made his presence felt with an entertainment quotient that included a combination of the American fantasy drama television series 'Game of Thrones' (GOT) and 2012 Hindi crime-drama film  'Gangs of Wasseypur'.
Wasim Jaffer replied by saying '2016 WT20, 2019 WC semi sabka badla lega re tera White Walker. unbowed, unbent, unbroken'.

While India were completely outplayed by a resurgent New Zealand outfit in the semi-finals of World Cup 2019 that was played for two days, the reason why the Mumbai cricketer has mentioned the 2016 T20 World Cup is that the Men In Blue had tasted bitter defeat against the same opposition in the league match of that tournament.

The MS Dhoni-led side were skittled for a paltry 79 in what was their opening match of the ICC World T20 2016 that was played at the VCA Stadium in Nagpur on a raging turner. The BlackCaps had posted a respectable total of 1267/7 from their 20 overs riding on a vital 34 from middle-order batsman Corey Anderson after winning the toss and electing to bat first.

India in reply lost the plot right from the beginning of their run chase and were bundled out in the penultimate over despite skipper  MS Dhoni's valiant knock of a run-a-ball 30. Thus, Kane Williamson & Co. kickstarted their campaign with an emphatic 47-run win.