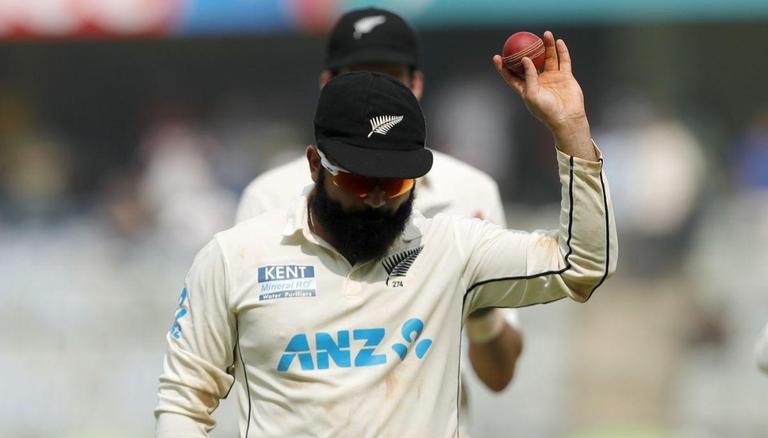 
New Zealand's left-arm spinner Ajaz Patel managed a feat only two other bowlers had done when he took all 10 wickets in an innings. It was a sensational bowling performance from the Kiwi and as he walked back to the stands he was given a huge standing ovation from the Wankhede Stadium crowd and also Ravichandran Ashwin. It was a truly proud moment for the Mumbai-born bowler, who could have only dreamt of such a reception at the iconic stadium, and more so while playing against India.

Incredible achievement as Ajaz Patel picks up all 10 wickets in the 1st innings of the 2nd Test.

He becomes the third bowler in the history of Test cricket to achieve this feat.#INDvNZ @Paytm pic.twitter.com/5iOsMVEuWq

Patel joins an elite class of bowlers - England's Jim Laker and India's Anil Kumble, to become only the third cricketer ever to take 10 wickets in an innings. Anil Kumble achieved the feat in 1999 against Pakistan, picking up 10/74 in 26.3 overs to hand India a remarkable 212-run victory. Jim Laker on the other hand picked up 10 wickets for 53 runs in 1956 against Australia at Old Trafford in Manchester.

Ajaz Patel dismissed Wriddhiman Saha to complete his 5-wicket haul on Saturday after trapping him LBW in the second over of the day. In the very next ball, Ajaz Patel cleaned up Ravichandran Ashwin with a peach of a delivery. The delivery was flighted onto the middle stump line, and as Ashwin looked to defend it on the front foot, the delivery gripped the surface and went past the outside edge to hit the top of the off-stump. However, Axar Patel managed to survive the hat-trick ball.

Mayank Agarwal and Axar Patel did build a good partnership but the partnership ended Patel when he had Agarwal caught by Tom Blundell behind the stumps.

After Agarwal's wicket, Axar Patel went on to complete his maiden half-century in Test cricket. However, his stay was ended by Ajaz Patel, who got him LBW. The initial appeal was turned down by the umpire but New Zealand decided to take DRS to successfully review it. The left-arm spinner picked up his 9th wicket when he had Jayant Yadav caught by Rachin Ravindra at long-on and picked up his historic 10th when he dismissed Mohammed Siraj as well.