What Is Air Compression Therapy, Virat Kohli's New Fitness Routine? All You Need To Know

Virat Kohli is known to be a stickler about his fitness routine but recently he was using dynamic compression or air compression therapy during his 'downtime'. 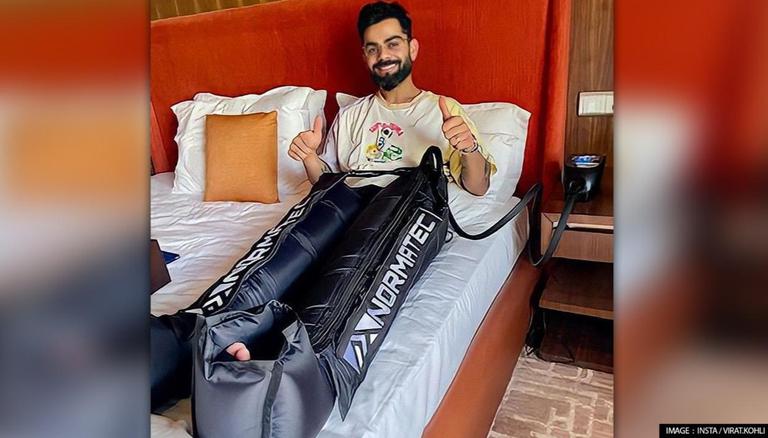 
After a hectic IPL 2021 season came to an unfortunate end for the Royal Challengers Bangalore, the team's skipper Virat Kohli was seen undergoing a much-needed recovery session. Kohli is known to be a stickler when it comes to his fitness routine, but recently he was seen using dynamic compression or air compression therapy during his 'downtime.

In a recent Instagram post shared by Kohli, he can be seen using the NormaTec recovery system pulse that is said to help with speedy recovery from fatigue post competition for athletes.

Dynamic air compression is essentially a technique that increases blood flow to specific parts of the body, accelerating its natural mechanisms for delivering oxygen, nutrients, and hormones throughout the body while simultaneously removing metabolic waste. With this, the body can increase the time it takes for muscle recovery, relieving pain, and inflammation that occurs owing to fatigue.

Dynamic air compression (also known as pneumatic compression) is meant to increase circulation in the legs and reduce pain and soreness. It mobilises fluid out of the extremities all the way from your foot, through your calf, to the lower hip while reducing muscle fatigue. The mechanism is not only meant for post-training or competition recovery but is also widely used for warming up.

Last month, Kohli had made it official that he would be leading the Bengaluru-based franchise for one last time in the Indian Premier League and Monday's Eliminator loss to Kolkata Knight Riders in Sharjah meant that the three-time finalists could not progress any further in the tournament. Taking to Twitter, Kohli wrote it was not the result that he and his team wanted and then added that he is so 'proud' of the character shown by the boys throughout the tournament. Furthermore, the batting megastar also mentioned that even though it was a disappointing end to their campaign, they can hold their heads high. The 'Captain Fearless' concluded by thanking all the fans, management & the support staff for their constant support.