WI Vs SA: How Fans Reacted To Windies 97 All Out On Day 1 Of Test Series

WI vs SA: West Indies' decision to bat first in the first Test backfired big time as South African speedsters ran riot and bowled them out for a paltry 97. 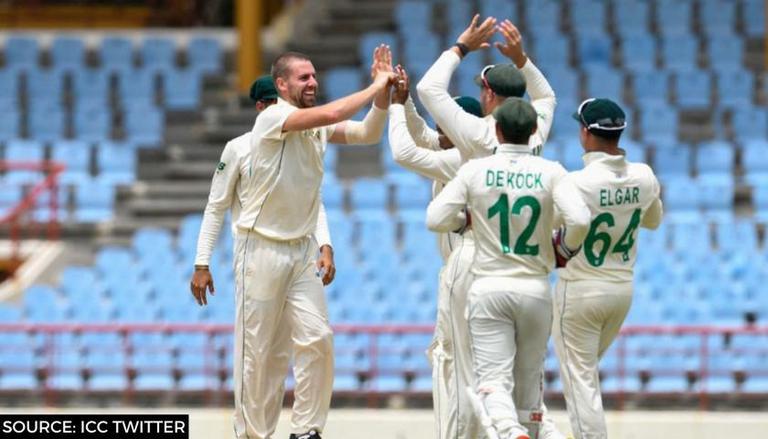 The West Indies vs South Africa Test series got underway on Thursday with the first Test in St Lucia. Having won the toss, Windies skipper Kraig Brathwaite decided to bat first which came as a surprise considering the ample grass present on the pitch. The hosts' decision backfired big time as South African speedsters ran riot and bowled them out for a paltry 97. In response, at Stumps on Day 1, the visitors reached 128/4 and have a lead of 31 runs with Russie van der Dussen batting on 32 and Quinton de Kock unbeaten on 4.

West Indies openers Shai Hope and Brathwaite started meticulously as they played out the first 10 overs without losing a wicket. However, in the 12th over, Anrich Nortje sent Hope back for 15 and followed it up by dismissing the West Indies skipper (15) in his next over. What followed was a flurry of wickets as the Caribbean batsmen had no answers against a relentless South African pace attack.

Nortje was instrumental in getting rid of West Indies' top and middle-order as he bagged wickets of Hope, Braithwaite, Kyle Mayers (1) and Jermaine Blackwood (1). On the other hand, Lungi Ngidi took care of the Caribbean middle order as he grabbed a five-wicket haul by claiming wickets of Roston Chase (8), top-scorer Jason Holder (20), Joshua Da Silva (0), Rahkeem Cornwall (13) and Kemar Roach (1). Kagiso Rabada picked a solitary wicket of Nkrumah Bonner for 10.

97 is West Indies lowest total in Tests at home against Proteas. The West Indies lowest total in Tests is 47 which they registered against England at Kingston in 2004. Twitter was abuzz after Windies were bowled out for 97. Several reactions poured in as fans slammed the Caribbean batsmen and lauded South African bowlers for their brilliant display of fast bowling. Here's a look at a few reactions.

All out for 97? Lmfao #Westindies #Cricket