IPL 2021 was suspended after several teams reported a breach in the bio-secure bubbles following positive results from players and support staff. 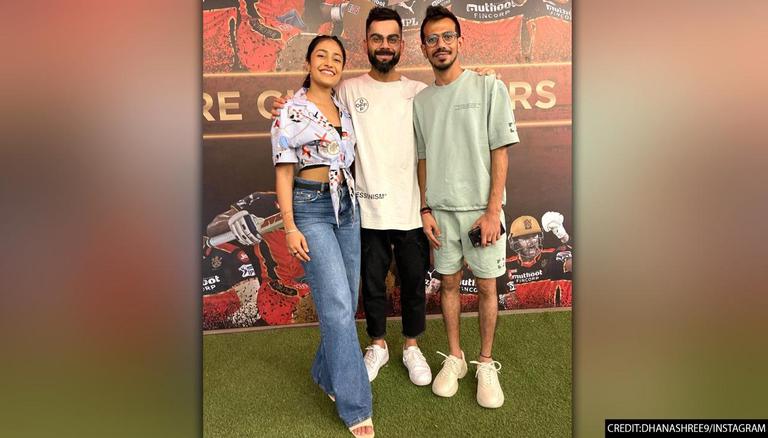 
Dancer and choreographer Dhanashree Verma took to her official Instagram handle to post pictures with Indian skipper Virat Kohli and her "spinner" husband Yuzvendra Chahal. In the post, Dhanashree recalled how she used to have "fun breakfast conversations" with Chahal and Kohli while camping together at the same hotel during the recently postponed edition of the Indian Premier League (IPL). In the post, Dhanashree can be seen posing for a picture with Kohli and Chahal in front of an RCB backdrop. "This ones with the skipper & spinner. From fun breakfast conversations to post-match fun, everything was so delightful and a great exchange of knowledge," Dhanashree captioned the post.

Dhanashree is known for her social media presence, where she keeps her followers entertained with dance and other videos. The 24-year-old recently posted a dance video in RCB jersey, where she could be seen showing off her moves on American rapper Soulja Boy's famous song 'She Make It Clap'. Through her post, Dhanashree also urged her followers to stay safe as the country continues to fight the second wave of the deadly COVID-19 pandemic, which has claimed more than 30,000 lives since May 15. The post has garnered more than 5,00,000 likes on Instagram.

IPL 2021 was suspended after several teams reported a breach in the bio-secure bubbles following positive results from players and support staff. The BCCI called off the cash-rich league on May 4 after members from the Chennai Super Kings and Sunrisers Hyderabad squads tested positive for COVID-19.

As far as IPL 2021 is concerned, RCB was cruising comfortably for a spot in the playoffs as the franchise was sitting at the number three position on the points table before the tournament was postponed indefinitely. Out of the 7 games that RCB played this season, the team managed to secure a victory in five of them. RCB lost just two games, one against Rajasthan Royals and another against Punjab Kings, which also turned out to be the franchise's last game before the suspension.

READ | Yuzvendra Chahal’s wife, Dhanashree Verma grooves to 'She Make It Clap' in RCB jersey
First Published: 22nd May, 2021 14:17 IST
SUBSCRIBE TO US