Ferrari F1 Happy With Progress In Power Unit: 'gap With Mercedes Not So Dramatic Anymore'

Ferrari F1 boss Mattia Binotto is happy with the progress the team has made on their power unit in comparison to the engines of Mercedes. 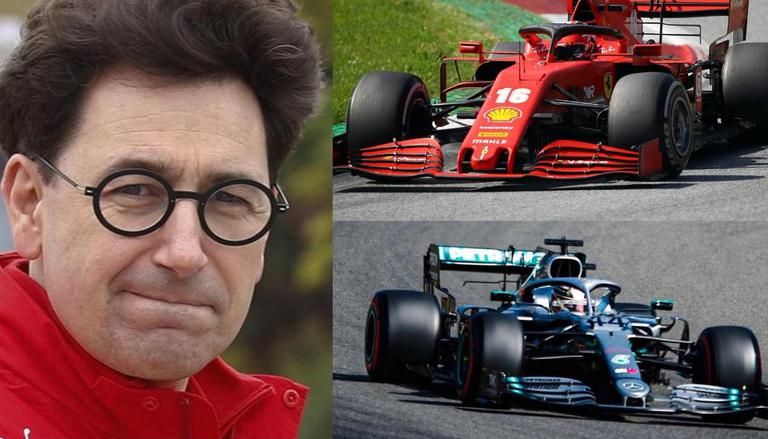 
Ferrari F1 boss Mattia Binotto is happy with the progress the team has made on their power unit in comparison to the engines of Mercedes. After the Italian outfit's latest upgrade, Binotto believes that the gap between their engine and that of the Mercedes 'is not so dramatic' anymore.

After falling to sixth in the Constructors' Championship in 2020, Ferrari has improved significantly to fight McLaren for third place in 2021. The improvement in their power unit is evident as Charles Leclerc grabbed back-to-back pole positions at the Monaco and Azerbaijan Grand Prix this year.

While speaking to Autosport after the United States Grand Prix, Ferrari F1 boss Mattia Binotto said, "The [additional] power is always available through the straight line, so you get the benefit from it at the start of the straight line and as well at the end. The way we can quantify that; if I look at this weekend [at Austin], we're running maximum downforce, but we're somehow almost matching the speed of the others. Considering last year, how the situation was, it is certainly a big step forward. We still know that there is a gap to the best engine today, but we believe that gap is not so dramatic."

READ | Ferrari F1 boss wants Verstappen to win title but believes Hamilton will win; this is why

The improvement in the extra horsepower for the Italian outfit may help them significantly in their battle to beat McLaren as Charles Leclerc finished last week's race in the Circuit of the Americas in fourth place for the second race in a row. As things stand in the Constructors' Championship, McLaren F1's (254) lead from Ferrari F1 (250.5) has reduced to just 3.5 points.

This is not it, as Binotto also explained how Ferrari F1 has demonstrated good performances on tracks that are not best suited to them. "Generally speaking, in the overall balance of the lap, I think we have been clearly faster this weekend. I think on the paper it was not a circuit which was suiting obviously our car. That's why I'm pleased with the progress I've seen in the last races, certainly the help of the power unit both for qualifying and the race, and that gives me some confidence for the next races." The next race will take place in Mexico from November 5 to 7.

WE RECOMMEND
Turkish GP: A look at the F1 Driver Championship standings after Valtteri Bottas' win
Saudi Arabian Grand Prix: Time-lapse of world's largest Lego F1 car will leave you in awe
Alpine F1 CEO explains how long Fernando Alonso and co will take to regain top spot
Formula One: Ferrari all set for engine upgrade in the second half, says Mattia Binotto
Verstappen pips Hamilton to pole position in qualifying for the US Grand Prix
Listen to the latest songs, only on JioSaavn.com