Dutch legend Arjen Robben couldn't hold back his tears after a MOTM performance on his return for Groningen seven months after an injury set back. 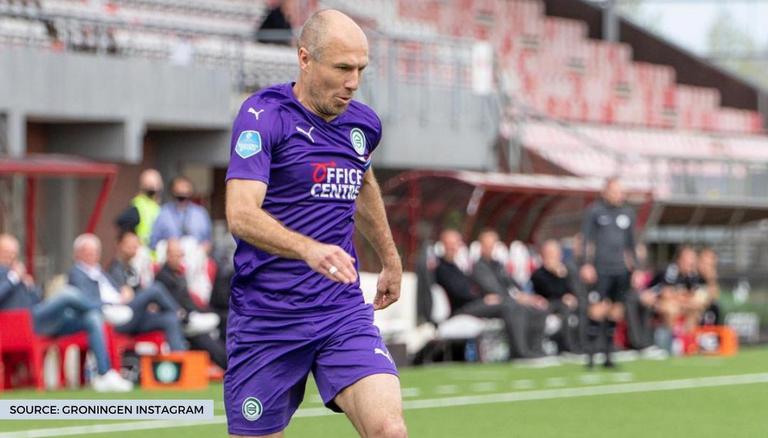 Dutch legend Arjen Robben has had a storied career with successful spells at Chelsea, Real Madrid and Bayern Munich among others. The winger, highly rated as one of the finest in football, hung up his boots after the 2018/19 season. He made comeback with boyhood club FC Groningen at the start of the season, to help them recover from COVID-19 losses.

Arjen Robben's return to the beautiful game was met with a brutal start as he was taken off after just 28 minutes during his second debut with FC Groningen. The veteran's injury against PSV Eindhoven saw him miss the subsequent seven months of action before he made a return from the bench less than a month ago against Heerenveen. Robben's recovery saw manager Danny Buijs hand him a league start against FC Emmen, and the former Real Madrid star did not disappoint. The former Dutch international set up two goals in an emphatic 4-0 win,  and his celebrations were a testament to the fact that he thoroughly enjoyed his return to the turf. Robben was emotional while he got onto his post-match media duties, and could hardly hold back his tears.

It was his first start for seven months after a long-term injury. pic.twitter.com/WK53Uaw4M8

Speaking to ESPN, Robben said, "I have come a long way, this is what I wanted. I want to help this club and I want to play football. If I can and succeed, then I am very happy. It has been a long and hard road. It was tough and difficult but I kept fighting. The reward has to come sometime. I had fun, like a child, and it was also important to the team today". Robben also suggested that he was open to returning to the Dutch national team if manager Frank de Boer should give him a shock call-up, three-and-a-half years since his retirement. The former Bayern Munich star however stated that he wants to stay realistic and see how things progress in the short term before eyeing a return for the Netherlands.

Arjen Robben would play for Netherlands at Euro 2020 if Frank de Boer called him!

"When I started this last summer, the European Championship was something of my wildest dreams. First stay realistic and see how things go in the coming weeks. Then we'll see." (VI) pic.twitter.com/TWZo4b7fn3

Arjen Robben made his debut for Groningen and made 52 appearances for the club before moving to PSV Eindhoven. The winger excelled and led the club to the 2003 Eredivisie title, scoring 21 times in 75 games before signing up for Chelsea during Roman Abramovich's initial years of ownership in 2004. Robben was instantly a fan favourite and played 106 times in three years for the Blues, winning two Premier League titles, two League Cups and one FA Cup under Jose Mourinho. He then moved across to Real Madrid but played just 65 games in two years while winning one LaLiga title before signing for Bayern Munich in 2009.

At Bayern, Robben developed a telepathic partnership with Frank Ribery, scoring 144 goals in 309 games across ten seasons. During his time in Bavaria, Bayern won eight Bundesliga titles, five German Cups and the 2013 Champions League before retiring in July 2019. He made 97 appearances for the Netherlands after debuting in 2003 as a 19-year-old and was the captain of the team that bowed out to Spain in the 2010 World Cup Final and that finished third four years later in Brazil.

READ | Harry Maguire injury update: Manchester United captain could be out of Europa League final
First Published: 10th May, 2021 12:07 IST
SUBSCRIBE TO US