The Barcelona legend signed a two-year contract extension with Vissel Kobe on his 37th birthday and received a special message from his former club. 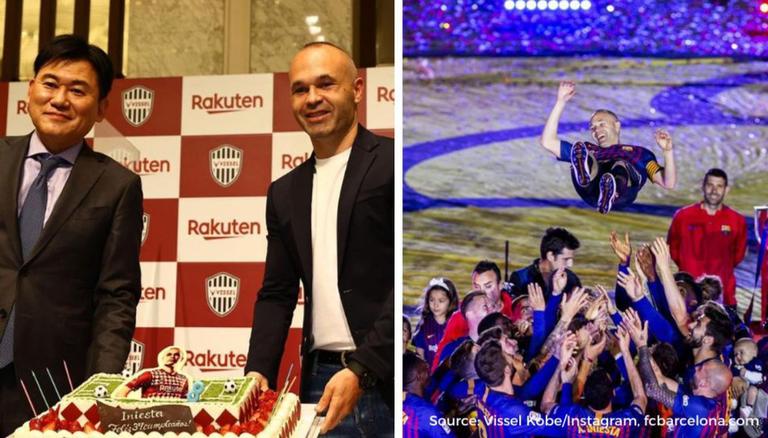 
Nine-time LaLiga winner and Barcelona legend Andres Iniesta signed a two-year contract extension at Vissel Kobe on his 37th birthday. The Spanish midfielder joined the Japanese club in 2018 when he decided to take up a new challenge after ending his remarkable 20-year career at Barcelona. On his birthday, the Barcelona legend also received a special tribute from his former club.

On Andres Iniesta birthday he not only signed a two-year contract extension with J-League club Vissel Kobe but also received a special celebration. The Barcelona legend was welcomed with a special cake with his number eight mentioned on it. He also took pictures alongside billionaire club owner Hiroshi Mikitani. One can see all the images below.

Iniesta also revealed his intentions of signing a contract extension with Vissel Kobe. The Spanish World Cup winner is keen on working towards making the Japanese side the best in Asia. Since he joined the J-League team, Kobe won their first silverware at the Emperor's club last year and also successfully qualified for the 2020 AFC Champions League for the first time in their 55-year history. While speaking of his contract extension (via a Japanese translator), Iniesta said, "I will continue on my quest to make Vissel Kobe a stronger club. I am determined to contribute as much as possible to bring this team to a higher level."

Meanwhile, Mikitani explained how Iniesta had elevated the success of the J-League since his arrival. Mikitani said, "Iniesta has not just improved Vissel's status, but he has improved the global recognition of the J-League." Moreover, Iniesta has revealed his desire to stay engaged with Vissel Kobe even once he hangs up his boots, although he did not mention in what capacity. According to Andres Iniesta contract, the Barcelona midfield maestro is believed to have joined Kobe in 2018 in a deal worth a staggering USD 30 million a year.

Andres Iniesta birthday: Barcelona pay tribute to their legend with a special video

Andres Iniesta is without question one of the greatest midfielders to have ever played the sport. Coming through Barcelona's La Masia academy, Iniesta went on to become a Barcelona icon. Iniesta recorded 57 goals and 139 assists in 674 games for Barcelona, winning a staggering 30 trophies along the way, including nine LaLiga titles and four Champions League medals. Considering Iniesta's long-lasting legacy at Barcelona, he undoubtedly deserves a great tribute and Barcelona did just that on his 37th birthday.