The likes of Ronaldinho, Rivaldo, Saviola, and Deco donned the Barcelona shirt again and the famous white shirt was worn by the likes of Roberto Carlos and Figo 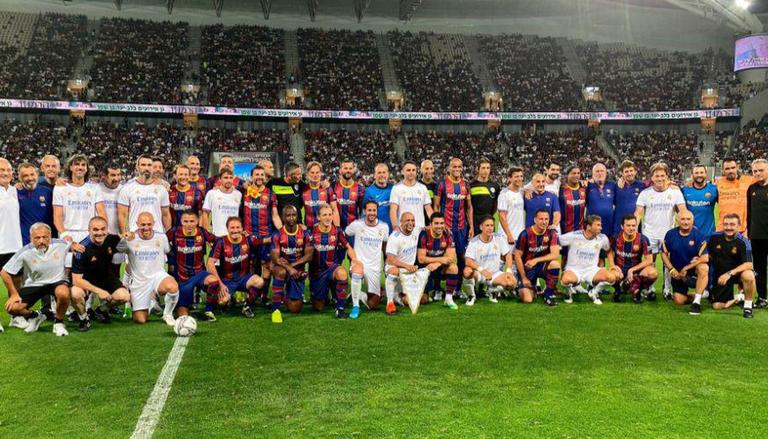 
In an entertaining and star-spangled contest, Barcelona Legends lost 2-3 to Real Madrid Legends in the El Clasico at the Bloomfield Stadium in Tel Aviv on Tuesday, July 20. The match was an exciting one that featured five goals and some fine football from the players of the past proving that they still have a little more in them.

Barcelona fielded a lineup stronger on paper with the likes of Ronaldinho, Rivaldo, Saviola, Deco, Goikoetxea, and Ronald de Boer on their team sheet. Real Madrid had Roberto Carlos, who captained them, and Luis Figo on their side with their other stars like Iker Casillas in the stands.

The match started with Barcelona dominating the game and Ronaldinho gave everyone a glimpse of glory days with a brilliant strike and was unlucky to be denied by the post in the 19th minute.

However, a spot-kick was awarded for foul on Saviola by Antonio Nunez by referee Sapir Berman, who made history last year by becoming the first transgender referee of a top-flight game in Israel, and Ronaldinho was on hand to convert it and give Barca the lead.

The match then took a slight turn as the Los Blancos started to play with a little more freedom, and in the 42nd minute, Pedro Munitis pounced on a rebound from Jose Amavisca's shot that was saved to level the scores.

About two minutes later Munitis picked up the ball wide on the right and put in an inch-perfect cross that landed right in the feet of Alfonso Perez who finished to put Real in the lead.

Perfect end to the perfect game

The tempo of the game dropped a bit in the second half and Barcelona took advantage as they drew themselves level, thanks to a wonderful solo run by Jofre Mateu in the 60th minute.

Around the 70th minute, De la red skipped past Goikoetxea, the Butcher of Bilbao, before wonderfully slotting the ball just inside the post and out of the reach of Guzmán from the edge of the penalty area to give Real the lead and eventually the win as they went on to hold onto the lead for a 2-3 victory.

It was a joyous occasion on a night where the local fans got to enjoy a fun and spirited match and some of the finest players of the past showed that they still have it in them.