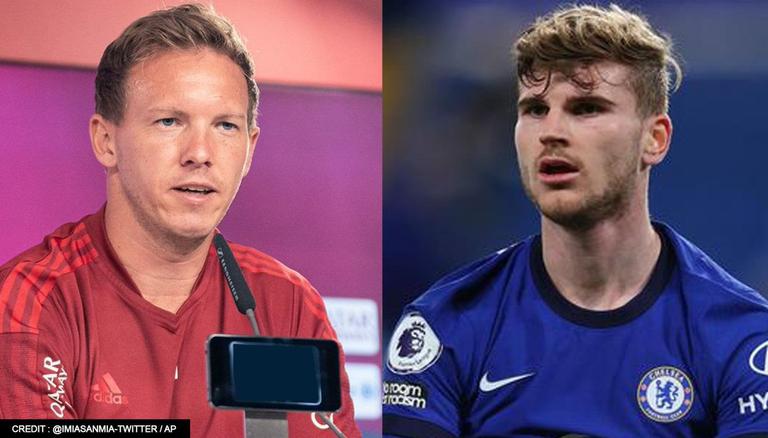 
Chelsea's Timo Werner is reportedly Bayern Munich's top transfer target in the next transfer window despite his extremely difficult 2020/21 Premier League season. Moreover, with the Blues signing Romelu Lukaku, Werner is likely to have fallen down the pecking order at Stamford Bridge. Thomas Tuchel's side signed Lukaku for a club-record fee of £98 million ($136m) from Inter Milan.

According to German outlet Sport1, Bayern Munich have spoken about signing Timo Werner from Chelsea. The German striker has found life difficult at Stamford Bridge as he just scored six goals and eight assists in 35 Premier League games. Werner, who was expected to solve Chelsea's attacking problems after his £47million move from RB Leipzig last year, is already finding himself down the pecking order as the Blues signed Romelu Lukaku this summer.

The report further claims that Bayern Munich are looking to sign Werner as they are interested in forming a team full of German stars. However, the Chelsea forward signed a five-year contract at the beginning of last season when Frank Lampard was in charge of the club. The German striker is believed to earn a whopping £250,000 per week.

After completing the much-anticipated signing of Romelu Lukaku from Inter Milan, Chelsea boss Thomas Tuchel insisted that the Belgian forward's arrival will help Timo Werner perform better. While speaking to the press last month, the Chelsea manager said, "I truly believe that this can be a big upgrade for [Werner]."

He explained that Lukaku's style of play will increase the time and space for Werner to attack. It remains to be seen whether the addition of the former Inter Milan striker will help Werner, who struggled at Stamford Bridge for most of last season.

Bayern Munich coach Julian Nagelsmann is likely to face a hostile environment when he leads his team to face his former club RB Leipzig. The Bundesliga match is scheduled to commence live at 10:00 PM IST on September 11. As things stand in the Bundesliga table, Bayern are currently in third place with seven points from three games.