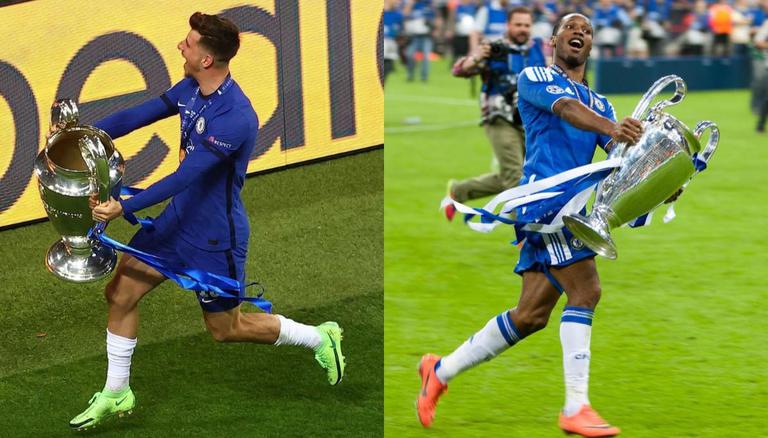 After winning European club football's greatest prize back in 2012, Chelsea did it again on Saturday night, beating Manchester City 1-0 in the 2021 Champions League final at the Estadio do Dragao in Porto. The celebrations were in full flow for the west London club at the full-time whistle, with Chelsea players running across the pitch in all different directions, piling on top of one another and celebrating with the supporters. All that was before the Chelsea players had even laid their hands on the trophy.

It was finally Chelsea captain Cesar Azpilicueta who lifted the Champions League for the first time in his career and the celebrations continued, with each player and member of staff taking it in turns to lay their hands on the European Cup. Mason Mount, who has grown up associated with Chelsea and been on their books since a very young age, knew exactly what he was doing, smiling and laughing as he took numerous twists and turns around the Estadio do Dragao pitch. It appeared as if Mount was almost using the trophy as a steering wheel to dictate his turns of direction.

Roll it back!!! 💙 @didierdrogba 👑 pic.twitter.com/JOR6ot8xET

The England star later took to social media to post an image of himself celebrating in a similar manner as Chelsea legend Didier Drogba when he won the title in 2012 with the Blues, much to the pleasure of the former Ivory Coast international. Mount captioned the post, "Roll is back", with a crown emoji. Drogba quickly responded to the post and wrote, “Maaaan! Which gear were you on I love you son mason, champions of Europe.”

READ | Chelsea Champions League road to the final: How the Blues pulled closer to a 2012 repeat

Mount featured in 11 games in the run to the Champions League final 2021, scoring two goals and providing two assists along the way. He also set up Chelsea’s winning goal against City. He scored a total of nine goals and racked up seven assists across all competitions.

Premier League champions Manchester City were tipped as favourites ahead of the Champions League final 2021 but suffered a desperately disappointing night in their first Champions League showpiece match. Chelsea's record signing Kai Havertz struck the knockout blow, netting the only goal of the game just before the break when he latched onto Mason Mount's excellent pass and knocked the ball beyond City goalkeeper Ederson before tapping it home into an empty net.

WE RECOMMEND
Chelsea Champions League road to the final: How the Blues pulled closer to a 2012 repeat
Chelsea Injury News: Mendy, Kante out of Champions League Final?
Toni Kroos trends on Twitter after savage reply to Chelsea midfielder Mason Mount
Chelsea are the only team Real Madrid have FAILED to beat in its Champions League history
Chelsea vs Leicester City head to head, prediction, team news and Premier League preview