Cristiano Ronaldo became the all-time leading scorer at the Euros on Tuesday with a goal from the penalty spot and was then referred to as 'Penaldo'. 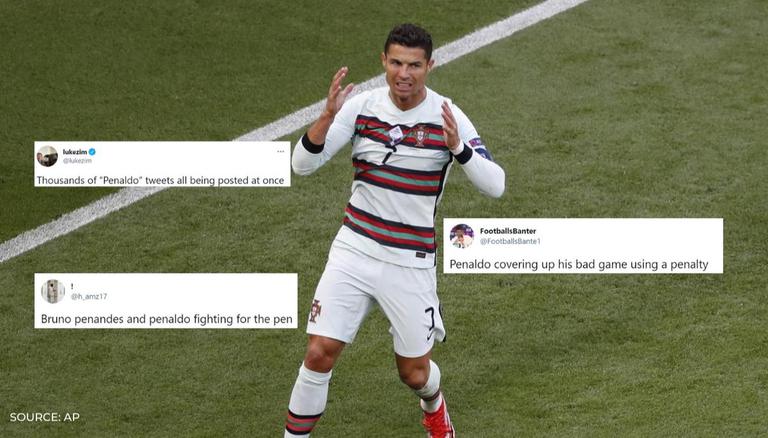 
Cristiano Ronaldo grabbed a late brace to become the European Championship's all-time leading scorer as Portugal beat a stubborn Hungary 3-0 in their Euro 2020 opener at a packed Puskas Arena on Tuesday. The five-time Ballon d'Or winner also holds the records for featuring in the most number of European Championships (5) and at the same time, also became the only player to score in five different Euros. However, Ronaldo got his first goal from the penalty spot against Hungary after Raphael Guerreiro broke the deadlock in the 84th minute and fans on social media were quick to label the 36-year-old 'Penaldo' on Twitter.

Portugal kicked off their Euro 2020 defence with a 3-0 win over Hungary on Tuesday as captain Cristiano Ronaldo made history by becoming the all-time top goalscorer at the major European tournament. Ronaldo became the first man to play in five European Championship tournaments, and his two goals in the victory took him to 11, surpassing French legend Michel Platini in the process.

Borussia Dortmund's Raphael Guerreiro broke the deadlock after 84 minutes with a shot from the centre of the box, while Ronaldo scored from a penalty three minutes later. Ronaldo then superbly added a second in injury time, dancing through a string of challenges to slot home his second of the match.

'Penaldo' trends on Twitter as Cristiano Ronaldo scores another penalty

Despite his historic feat, fans on social media were quick to label Ronaldo as 'Penaldo' on Twitter after the Portuguese star converted from the penalty spot. One wrote, "Ronaldo reaches greatness with a penalty. Not a coincidence people call him Penaldo", while another added, "Penaldo at it again. This time with Portugal." However, some also defended Ronaldo after the superstar forward scored his second on the night in injury time.

Ronaldo was also in a three-way tie for most victories at a European Championship, going into the Hungary game. He was tied on 11 wins with Andres Iniesta and Cesc Fabregas. However, with the win over Hungary, Ronaldo has taken the record all by himself.