Giorgio Chiellini has answered the most hyped question in the football world, about who is his favorite footballer among Cristiano Ronaldo and Lionel Messi. 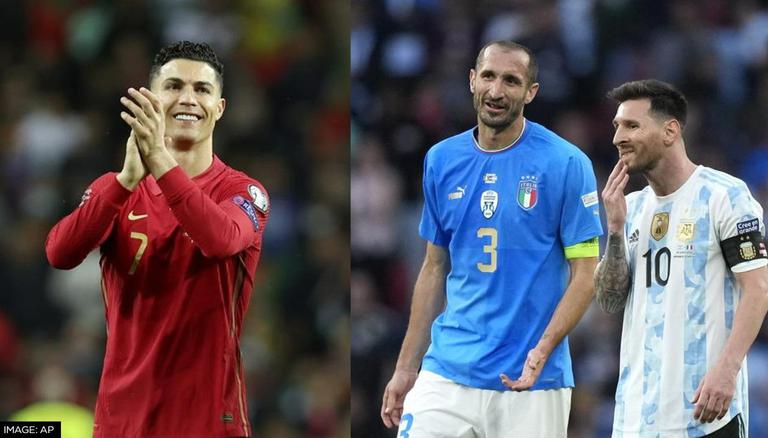 
Former Italy football captain Giorgio Chiellini has revealed who is his favorite footballer among the two greats of the game, Lionel Messi and Cristiano Ronaldo. Chiellini sat down with ESPN for a fun session named, ‘You Have To Answer’. While answering the questions, the 37-year-old Italian footballer was given a choice to choose between Argentine great Messi and the Portuguese superstar Ronaldo.

Meanwhile, on being asked to reveal his choice, Chiellini was quick to name Ronaldo as his favorite footballer. The reason behind Chiellini’s answer can be understood to be the fact that he spent three years with Ronaldo, playing for the Serie A giants Juventus. Ronaldo joined Juventus in July 2018, after ending his nine-year-long stint with La Liga giants Real Madrid.

At the same time, Chiellini represented Juventus for a total of 17 years from 2005 to 2022, before moving on and joining Major League Soccer team Los Angeles FC. Ronaldo arrived at Juventus in 2018, following a stellar campaign with Madrid, after picking his fourth UEFA Champions League title with the club. He played a total of 134 games for the Serie A side across competitions and contributed with 101 goals and 22 assists.

Cristiano Ronaldo and Giorgio Chiellini's time playing together for Juventus

It is pertinent to mention that Chiellini decided to end his time with Juventus following the conclusion of the 2021-22 season. The center-back represented Juventus in a total of 560 games while returning with 36 goals and 24 assists. He will now play the remaining years of his career in the US for the LAFC.

It should also be noted that Chiellini also decided to end his international football career for Italy, earlier this year in June. Although he had planned to continue playing for the team untill the 2022 FIFA World Cup Qatar, Italy failed to qualify for the mega event. However, Messi and Ronaldo will feature in the upcoming football world cup, which begins in November, representing their national teams.

READ | Chelsea boss Tuchel not ruling out moves for Ronaldo or Lewandowski; 'It's not a secret'
SUBSCRIBE TO US