Juventus ace Cristiano Ronaldo has come under the scanner for turning his back during Sergio Oliveira's stunning set-piece to score the winner on Tuesday. 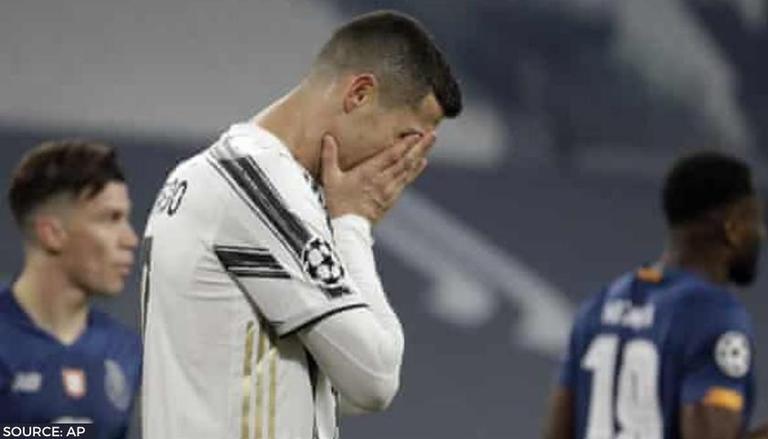 Italian champions Juventus appear to face the heat as they continue to tumble across competitions. Andrea Pirlo's men have so far struggled in their Serie A title defence and are prospectively out of the race this season. The Champions League, which appeared to their only beacon of hope, is also out of sight after being knocked out by FC Porto on Tuesday. And club superstar Cristiano Ronaldo has come in for some massive scrutiny for his role in conceding FC Porto's winner.

Juventus hosted FC Porto with a goal's deficit following their 2-1 defeat in the first leg. And Sergio Oliveira put his side in the front at the Allianz Stadium in the 19th minute of the second leg. Merih Demiral gifted a penalty to Porto following his challenge on Mehdi Taremi and Oliveira succeeded in converting from the spot.

Cristiano Ronaldo & Juventus exit Champions League at round of 16 stage for 2nd season in a row.#UCL pic.twitter.com/LbFmOu59mo

But Federico Chiesa equalised in the second half with Ronaldo acting as the provider in the 49th minute. The Italian midfielder struck in the far right corner from the edge of the box. Chiesa bagged his brace in the 63rd minute as he timed a perfect header to meet Juan Cuadrado's cross.

The scoreline was even on aggregate and continued to do so until the 90th minute. With the extra time play, Oliveira went on to bag the aggregate lead following a thrilling set-piece in the 115th minute. The Porto striker fired a low kick past the Juventus wall, with Ronaldo, Adrien Rabiot and Alvaro Morata at the helm.

Juve out because Ronaldo was to scared to stand still in the wall😭😭😭😭pic.twitter.com/10tjsNCp16

Although Wojciech Szczęsny did get his hand on the ball, he failed at large to stop it from crossing the goal line. Ronaldo has come under the scanner for turning his back during the build-up to the Oliveira goal, before stretching his legs wide open to let the ball escape the wall. Adrien Rabiot did score two minutes later to make it 3-3 on aggregate, but Porto advanced to the quarter-final owing to the away-goal lead.

Speaking to Sky Sport Italia, former Juventus player Fabio Capello describes Ronaldo's mistake as an unforgivable error. "In my day, you chose the players who went into the wall and they couldn't be someone afraid of the ball. They were scared of the ball and jumped away from it, turning their backs. That's unforgivable."

Ronaldo's former Manchester United teammate Rio Ferdinand also slammed the Portuguese international for the debacle. Speaking to BT Sport, Ferdinand said, "All three of them were at fault – turning their back and jumping out of the way. The whole thing was a catalogue of errors."