Portugal captain Cristiano Ronaldo was heavily trolled on social media after his free-kick against Isreal went flying into the stands; watch. 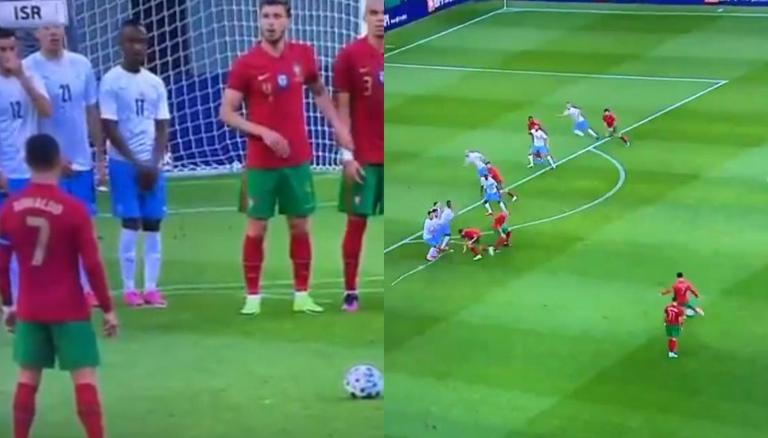 Cristiano Ronaldo proved that he is only human after a moment to forget in Portugal's final friendly in the lead up to the European Championships. Portugal are the defending champions and will begin their campaign next week in the group of death that also includes France and Germany. And while Ronaldo will be pleased to get on the scoresheet ahead of the tournament, a moment of sheer embarrassment will have marred the competitor inside him.

Cristiano Ronaldo might have evolved as a great goal scorer over the years, but his freekick prowess has been on the wane as the five-time Ballon d'Or winner enters the final stages of his career. Ronaldo has only scored a single free-kick in club football since he found the net for Real Madrid in the 2017 FIFA Club World Cup final, and his record from dead-ball situations for Juventus has been dreadful, to say the least.

While his record for the national team has been better, with goals against Spain, Switzerland and Sweden, the game against Israel again provided a reminder of his fading free kick skills. The Portugal captain lined up to take a free-kick at a fair distance from the penalty box, with Bruno Fernandes also presenting himself as an option. Ronaldo assumed responsibility but shot well over the bar, with the ball landing in the stands in a moment of sheer embarrassment for the five-time Ballon d'Or winner.

The video soon went viral on social media and many made full use of the opportunity to troll the Juventus ace. Netizens sarcastically claimed that the free-kick was the best ever in history, with many writing that the 36-year-old was "finished". Others were more direct, asking Ronaldo to give up his free-kick duties to Bruno Fernandes, who has showcased his skill from dead ball situations time and again for Manchester United. One user commented that Ronaldo taking free kicks is too dangerous for the crowd and many requested him to hand over set-piece duty to his teammates.

I present to you the Greatest free kick taker of all time..
Portugal Captain Ronaldo
GOAT🐐🔥🔥#POR #Euro2021 #EURO2020 pic.twitter.com/HDSv9DrpL8

He really needs to let go of the free kick duties now https://t.co/n8zBmON0NN

He shouldn't be allowed to take free-kicks once the crowd returns. It's too dangerous. The ball can literally hit anyone. 💀 https://t.co/K4D634f514

While Ronaldo had an awful freekick, he did manage to get on the scoresheet and inch closer to becoming the highest ever goalscorer in internationals. His goal against Israel was his 104th or Portugal, five lesser than Iran's Ali Daei. Ronaldo has scored 43 goals in his last 42 caps for the national team and has helped his team to multiple international honours, winning the 2016 Euro and the Nations League. Ronaldo will hope that his team can defend their European Championship title this summer when they begin their Euro 2020 campaign next week.

🤯 A phenomenal run of 43 goals in his last 42 caps has Ronaldo just 5 goals short of equalling Ali Daei's men's world record. Will this machine ever slow down? ⚽️ pic.twitter.com/K9dqA91xBF