After it was officially announced by FC Barcelona that Lionel Messi will not be continuing with them Dani Alves has opened up on Messi's departure. 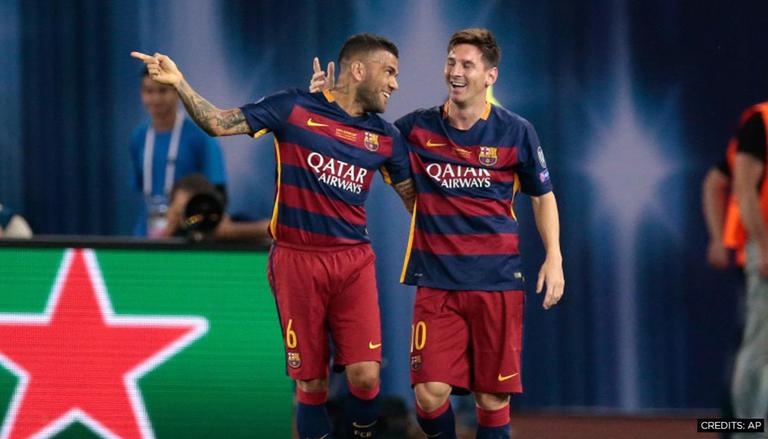 
Dani Alves and Lionel Messi played 349 matches together at FC Barcelona before the full-back departed the Blaugrana in 2016 after having spent eight years there. The Brazilian was a great friend to Messi despite being from rival nations. On August 5, Barca announced the departure of Messi which sent a huge shockwave across the footballing world after having spent 21 years at the club. Many of Leo's now ex-teammates sent their heartfelt farewell messages to him via social media.

Dani Alves, who just won the Gold with Brazil at the Tokyo Olympics 2020, spoke to Diaro Sport about Messi's departure and said that it was not a good time for both the club and the player and that he felt sorry for both.

"I am very sorry for Messi and Barça. Now is not a good time for either side. I think Barça will not be the same because Barça with Messi is one thing, and Barça without Messi is another. But Barça will continue to be Barça and Messi will continue to be Messi. It’s a new challenge for Messi and for Barça, but I think challenges make you better most of the time because they force you out of your comfort zone."

Messi to speak at a press conference

Lionel Messi will speak publicly at a press conference for the first time since FC Barcelona player shockingly announced his departure from the club after 21 years on Thursday, August 5. The Catalan club confirmed that Messi will speak at a conference scheduled for Sunday, August 8, at 3:30 p.m. IST. FC Barcelona and Messi fans will undoubtedly want to hear their beloved player's side of the story. The Catalonian giants were unable to offer Messi a new contract despite both parties coming to terms on a new deal because La Liga's financial fair play rules would not permit them to do so, as per Barcelona president Joan Laporta, after his previous contract expired on June 30, 2021

Why is Messi leaving Barcelona after 21 years?

While speaking at a press conference on Friday, Laporta explained that the club was not able to register Lionel Messi's contract because of LaLiga's financial fair play rules.

"What we are spending is a lot more than we expected and the current contracts mean that we have this salary mass of great magnitude. This is all tied to fair play. La Liga doesn't follow the criteria of cash, that is why we couldn't fit in the first contract that we agreed with Leo Messi," said Laporta.