Danish Football Referee Falls To His Knees After Realising His Mistake; Netizens React

After realising he had made the wrong judgement and perhaps cost one of the teams a key goal, a Danish referee fell down to his knees during a football game. 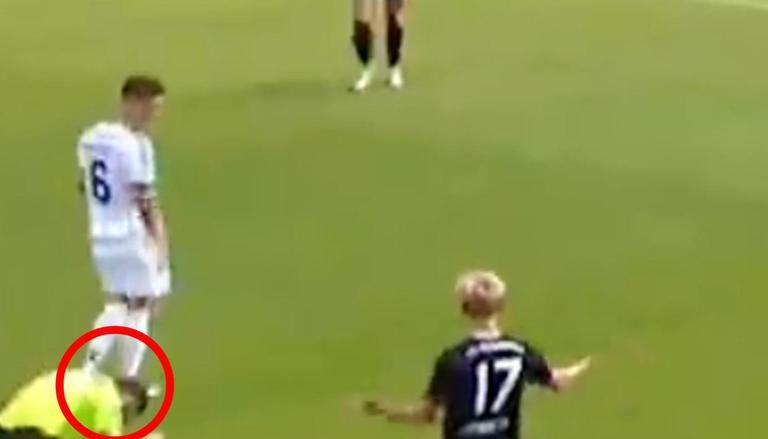 
After realising he had made the wrong judgement and perhaps cost one of the teams a key goal, a Danish referee abruptly went down to his knees during a game. Nils Heer, who was refereeing a second-tier league match between FC Fredericia and Vendsyssel FF in Denmark, was involved in the incident, which went viral on social media.

It happened during the Vendsyssel FF Vs FC Fredericia match

The event occurred during a weekend match between Vendsyssel FF and FC Fredericia in the Danish second level NordicBet Liga. Fredericia was attempting to tie the score in the first half after falling behind 1-0, and their midfielder Kristian Kirkegaard was fouled as he approached the penalty area. However, the player had already passed the ball to a teammate and sent him through on goal just before being stopped. However, the referee missed it and blew his whistle, denying the squad the opportunity to respond following an early score. Heer, on the other hand, didn't take long to realise his error and threw himself on the ground with his hands over his head.

This amusing incident has been mainly positively received by followers on social media, with many praising Heer's candour. Multiple Twitter handles have posted the video, and people have reacted calmly in all of the shared videos. As one fan put it, "A simple apology would have sufficed."

And look how the players react, almost 0 complaining. Shows if referees show a bit of honesty about their mistakes and don't make themselves star of the show it cuts out the crap.

Another fan wrote, "Humans are human and they make mistakes. If everyone realized that more often, we would be way better off as a society. Kudos to him for realized he made a mistake."

He’s absolutely raging with himself. 😂😂

"First thing that I thought. Players immediately reacted to the humility of the referee. I still can't understand why they do not do post-match interviews to explain their decisions or admit they got things," shared another Twitter user.

Even the team he screwed over feel sorry for him 🤣🤣

Awwww 😂, at least he admitted he was wrong.

A referee who pulled out a gun

In a recent amateur match in a small Honduras town, mayhem broke out when a referee pulled out a gun at the end of the game. Footage of the horrifying occurrence has gone viral on social media, showing an official with a pistol pacing around the centre of the pitch. According to local media accounts, the referee had drawn his weapon to protect himself from supporters after the amateur tournament in the western Honduras town of La Jigua had ended.

READ | DYK Pamela Anderson got her big break after appearing on screen during a football match?

Shocking defending from referee after fans and players were not happy with some of his decisions during the game.

In a small town in #Honduras, a referee pulled a gun to defend himself from a mob.😳
(Video via @DiogenesAcosta)pic.twitter.com/6CcVBX8v1T