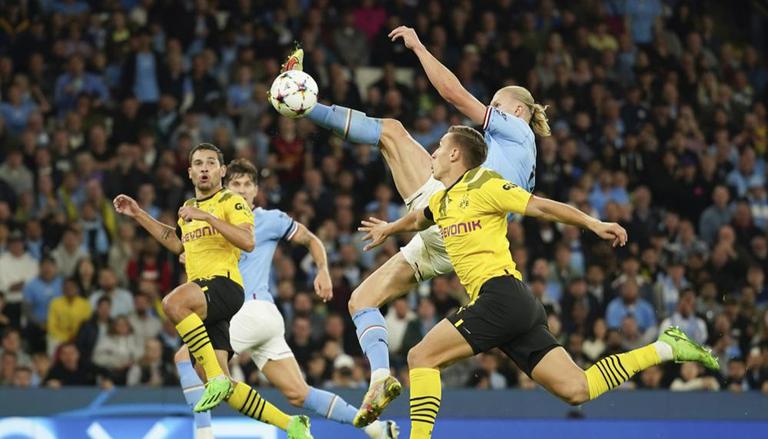 
Norwegian footballer Erling Haaland became one of the biggest talking points in the football world on matchday 2 of the UEFA Champions League 2022-23 tournament. Playing against his former club Borussia Dortmund at the Etihad Stadium, Haaland put an enthralling performance by striking a karate-kick-styled goal in the 84th minute. He met a high cross with a twisting leap in the air and pulled off an acrobatic volley, after it looked like that ball had passed him.

This was Haaland’s 26th Champions League goal in his 21st appearance, as he maintained his streak of scoring for City in six straight games. Even the 22-year-old was surprised by his incredible effort to score the goal and revealed his feelings about it after the match. According to UCL, speaking about his late winner, Haaland said, “I think I have really long legs! That’s how I reached the ball. It was a really good goal, I have to say!”.

Jude Bellingham opened the scoresheet of the match by scoring for Dortmund in the 56th minute. However, the reigning Premier League champions leveled the score in the 80th minute, courtesy of a stunning equalizer by John Stones. Haaland then scored the winning goal in the 84th minute, as the match ended 2-1 in City's favor.

Haaland’s goal quickly became a topic of discussion for football fans on social media. “Where are those who claim he only scores tap-ins....this guy is a beast...very silent but still delivers,” a fan said. “Haaland didn't lie when he said Zlatan He is my idol,” another fan said.

Where are those who claim he only scores tap ins....this guy is a beast...very silent but still delivers

Haaland didn't lie when he said Zlatan He is my idol

It might have been a TAP-IN, but a lot of players still wouldn't have delivered. Simply, it was a fantastic tap-in, and most importantly, A GOAL

While Haaland and Stones scored for City in their 2-1 win against Dortmund, the trio of Lionel Messi, Neymar, and Kylian Mbappe scored goals for PSG, in their 1-3 away win at Haifa. Messi scored in the 37th minute to level scores 1-1 against Maccabi Haifa before Mbappe and Neymar netted goals in 69th and 88th minutes respectively. This was the first goal of the Champions League 2022-23 season for Messi.

READ | Thierry Henry settles Erling Haaland vs Kylian Mbappe debate; 'With him, they can win UCL'

Meanwhile, Real Madrid won 2-0 against RB Leipzig on Wednesday night, while Chelsea managed to earn a 1-1 draw against RB Salzburg. Earlier on Tuesday, Tottenham Hotspur faced a 0-2 defeat against Sporting, while Bayern defeated Barcelona by 2-0. At the same time, Liverpool defeated Ajax by 2-1 on matchday 1.