According to the top public security authority in Rome, Matteo Piantedosi, the Italian team's open bus parade after their Euro 2020 victory was not authorised. 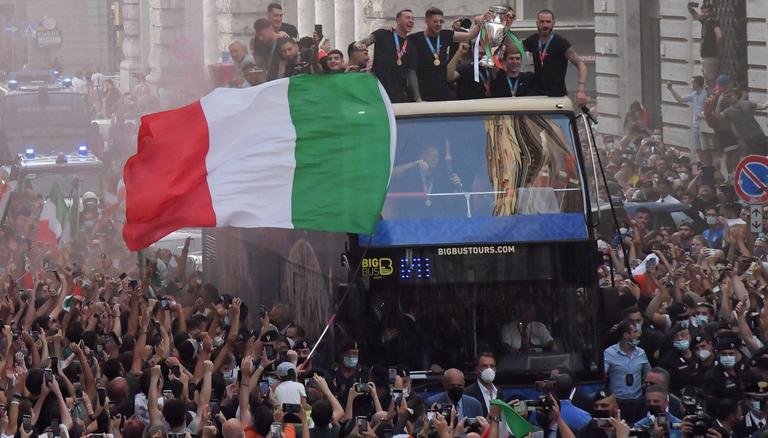 
Rome's top public security authority Matteo Piantedosi informed that open bus celebrations by Italy's football team - which emerged victorious in the recently concluded Euro 2020 finals - were not authorised in view of the COVID pandemic. The Italian team returned from London after defeating England 3-2 on penalties in the finals at Wembley.

Members of Italy's football side overrode police objections and took ou an open bus tour through the streets of Rome after its Euro 2020 victory, even though this had been forbidden for fear of spreading COVID-19 infections, the capital's prefect said.

Italy manager alongside all the team members celebrated by taking the trophy to the streets of Rome but it has now come to light that in actuality the team was denied permission to ride through the city due to COVID-19 restrictions.

Through the streets of Rome we go 😍#Azzurri 🏆🇮🇹 #EURO2020 #VivoAzzurro pic.twitter.com/BPyjRHWPBC

"We had denied permission to celebrate Italy's victory in the European Championships on the open bus, but the pacts were not respected," the Rome prefect told sources as per reports.

"Last Friday we convened a committee for order and security. I had agreed on the line with the Minister of Interior Luciana Lamorgese and with the police chief Lamberto Giannini," he added.

Further talking about the incident, Piantedosi said that "The meeting was precisely to decide what to do and for this reason, we also directly involved the FIGC, which asked to allow the athletes of the national team to take a ride around Rome on an open bus, but it was clearly explained that it was not possible. We said we could not authorise them."

Piantedosi also said that the parade was allowed to go ahead in order to avoid public disorder. Thousands of fans turned up to see their country's heroes show off their latest triumph.

The final of the Euro 2020 started with England taking the lead early in the second minute through a wonderful Luke Shaw half volley after a pinpoint Kieran Trippier cross to send Wembley into raptures. They dominated the initial 20 minutes of the game with the change of formation for England tough for the Italians to read.

However, the Italians soon found the rhythm that they had throughout the tournament. The Azzurri dominated proceedings after that and in the 67th minute, Bonnuci found the back of the net owing to a goalmouth scramble following a dangerous corner.

READ | Euro 2020: Official UEFA Team of the Tournament out; check who made the cut

The score remained 1-1 at the end of 90 minutes as well as after Extra-Time. Italy won 3-2 on penalties after three England players, Marcus Rashford, Jadon Sancho, and Bukayo Saka all failed to convert their respective spot-kicks and handed the Euro 2020 trophy to Italy.