Germany qualified for FIFA World Cup 2022 in Qatar after win over North Macedonia with 2 goals from Timo Werner and one each from Kai Havertz & Jamal Musiala. 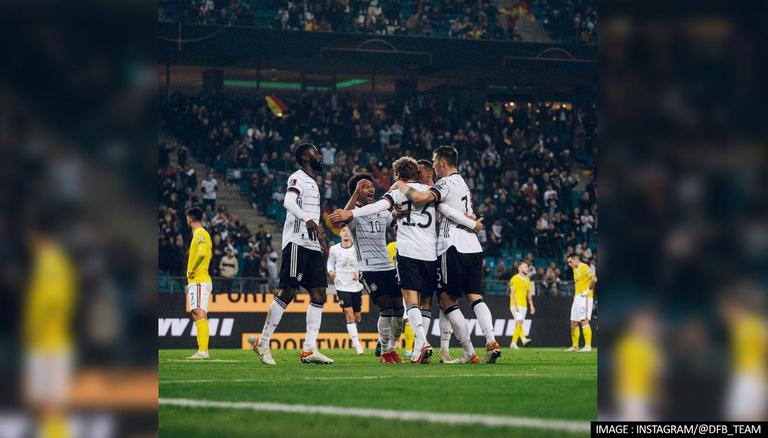 
After a poor outing in the Euro 2020, Germany bounced back in style to become the first team to qualify for the FIFA World Cup 2022 after crushing North Macedonia 4-0. The victory also meant that the former World Champions take the top spot in Group J with two matches left to play in qualifiers.  The win also meant Germany have a perfect record of five games played, five won, 18 goals scored, and just one conceded. All group winners in European qualification automatically secure a place at the tournament in Qatar.

Germany's win over North Macedonia can be credited to brace from Chelsea striker Timo Werner and a goal each from Kai Haveretz and Jamal Musiela. Hans Flick-coached team created only a handful of chances in the first half with Timo Werner hitting the post with a low drive in stoppage time.

Germany, who were beaten 2-1 by North Macedonia back in March, broke the deadlock in the 50th minute. Serge Gnabry's superb pass found Mueller who set up Kai Havertz to tap in the ball. Once Haveretz broke the deadlock, it was the turn of his Chelsea teammate Timo Werner to find back of the net. The forward scored two goals in three minutes to dash North Macedonia's hopes. Werner's first goal in the match came from another assist by Thomas Mueller in the 70th minute following which three minutes later he curled an effort a shot home from 15 metres. Substitute Jmaal Substitute Musiala completed the rout seven minutes before the end.

READ | FIFA World Cup 2022: VAR to be set up at the venue itself for European qualifying matches