Diego Simeone was hurled with drinks and objects by Manchester United fans, after United got knocked out of UCL 2021-22, following 0-1 loss to Atletico Madrid. 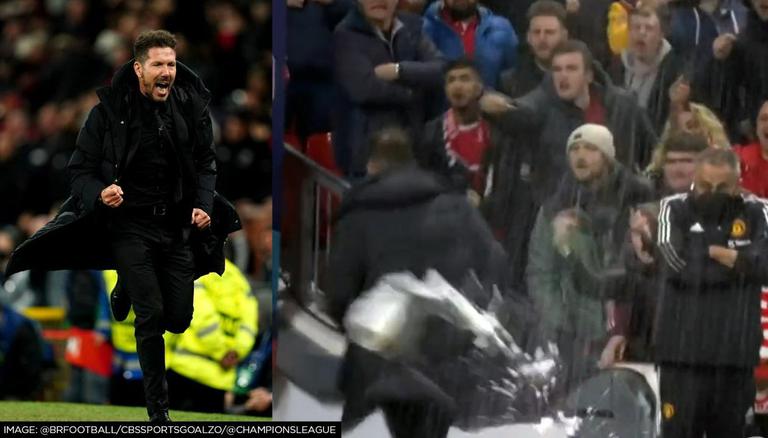 
Atletico Madrid coach Diego Simeone became the talk of the town on Tuesday night after his side earned a 0-1 victory over Manchester United in the Round of 16, Leg 2 match of the UEFA Champions League 2021-22. While the United were knocked out of the tournament following the defensive masterclass by Atletico, Simeone found himself in the headlines for facing the wrath of the disappointed United fans at the Old Trafford Stadium. After the final whistle of the game, the United fans took out their frustrations on the Atletico coach by throwing drinks on him while the 51-year-old ran down the tunnel.

It is usual routine for Simeone to dart inside the tunnel after the final whistle, however, he was attacked by the United fans on Tuesday night. The video of the fans hurling Simeone quickly went viral on social media and received various reactions from football fans. A fan said that UEFA should react to the incident as soon as possible, citing that the behavior is unacceptable and disrespectful. At the same time, another fan said that United fans should vent their anger towards their team, rather than showing frustration towards the visiting manager.

READ | Paolo Di Canio joins Messi vs Ronaldo debate, says he prefers 'the human who has a soul'

UEFA should react to this as soon as possible! This is unacceptable, where's respect?

This is really poor from this section of Manchester United fans,they should vent their anger and frustration on their team not on a visiting manager.

Disgusting from those who did this. Its the tactics they use. We know this. It is upto us to score a goal regardless.

On the match front, Renan Lodi scored the lone goal of the match-up, which proved to be the match-winning difference for the visiting Atletico side. As per AP, revealing his thoughts after the goal-scoring effort which took the team through the quarter-final of UCL 2021-22, Lodi said, “I wasn’t playing a few months ago, but everything has changed now and I’m very happy with that. It’s a tough role. I’m working at it, learning”.

Meanwhile, a two-time Champions League runner-up, Simeone leads the team in the quarterfinals of the tournament, just like in 2020. Atletico is looking to raise their game in Europe this season, as they currently sit fourth in the La Liga 2021-22 points table, after winning the title last season. On the other hand, United continue to suffer from the poor season as this was the eighth time in 10 years that the team failed to reach the Champions League quarterfinals. They have reached the quarterfinals only in 2014 and 2019 in the last decade.

READ | 'End of an era': Twitter explodes as both Messi, Ronaldo miss out on UCL last-8 once again