Gavi was one of the six-goal scorers for Spain during their dominating 7-0 win over Costa Rica in Group E of the FIFA World Cup 2022 Qatar on Wednesday. 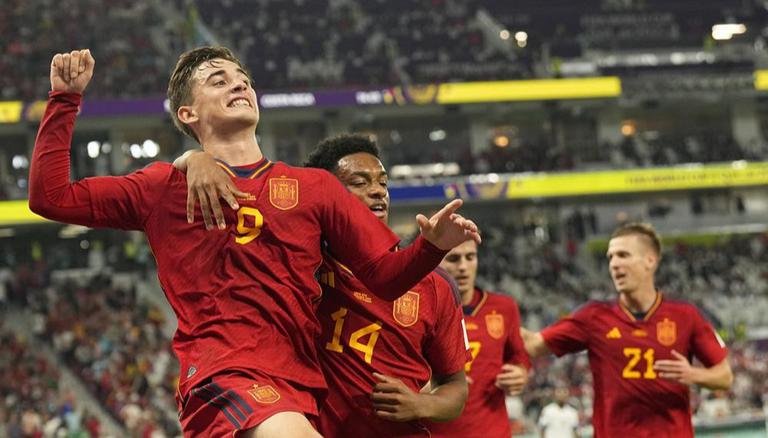 
Spain kicked off their campaign at the FIFA World Cup 2022 with a sensational 7-0 victory over Costa Rica at the Al Thumama Stadium in Qatar. While Japan scripted a major upset with a 2-1 win over Germany in the Group E match, the Spanish side ended matchday 4 with the top spot in the group standings. Meanwhile, 18-year-old sensation Gavi received the Player of the Match award for his contributions to the victory and also became the first player since Brazilian legend Pele to script a unique record.

While Dani Olmo opened the score sheet for the 2010 FIFA World Cup champions in the 11th minute, Marco Asensio doubled the lead 10 minutes later. Barcelona footballer Ferran Torres registered his first goal of the night through a penalty goal in the 31st minute as Spain ended the first half with a 3-0 lead. Torres struck for the second time in the 54th minute before Gavi converted an assist by Alvaro Morata to score his first-ever World Cup goal.

With the goal, the teenager became the youngest footballer since Pele in 1958 to score a goal in the prestigious quadrennial event. While Gavi achieved the record at the age of 18 years and 110 days, Pele was 17 years and 249 days old when he scored against Sweden in the 1958 FIFA World Cup final. Pele scored twice against Sweden on June 29, 1958, and led Brazil to their first-ever World Cup title.

Coming back to the Spain vs Costa Rica game on Wednesday, Gavi’s strike was followed by Carlos Soler in the 90th minute, after coming in as a substitute for Pedri in the 57th minute. Going ahead in the game, Alvaro Morata converted an assist by Dani Olmo two minutes into the injury time, as Spain clinched a stunning 7-0 victory. This was the biggest victory for Spain in the World Cup and the biggest victory in the World Cup overall, after Portugal’s 7-0 win over DPR Korea in 2010.

At the same time, the match resulted in the biggest loss for Costa Rica in the World Cup, while they conceded as many goals in the game as they did in their last eight matches. Spain will now face 2014 World Cup champions on November 24, before ending their group stage campaign against Japan on December 2. On the other hand, Costa Rica face Japan in their next game on November 27, before taking on Germany on December 2.