Is Lionel Messi Behind James Rodriguez's Decision To Leave Everton? All You Need To Know 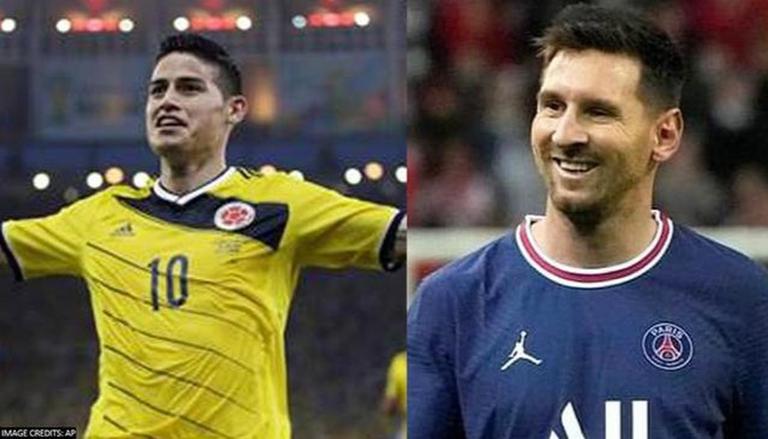 
Former Real Madrid and Monaco star James Rodriguez was confirmed as Al Rayyan SC's new signing on Wednesday. He is now close to being unveiled as an Al Rayyan SC player after the Qatari Club posted a video on Wednesday. They also posted an update that they will be presenting the Colombian midfielder at the Ahmed Bin Ali Stadium on Thursday and have invited their fans to come and watch. While the transfer itself is not surprising as the player was said to be unhappy at Everton, there are reports suggesting that there is a 'secret clause' in James' contract that will allow him to leave if Paris Saint-Germain makes an offer for him.

According to Diario AS via Mundo Deportivo, James has a clause that will let him leave if PSG offers a deal for the playmaker, so it seems that the Colombian has a deep-rooted desire to play with Lionel Messi, Neymar, or maybe even reunite with his old teammate Sergio Ramos. However, given his current form and lack of game time, it seems very unlikely that PSG would attempt to sign James.

Benitez on James' exit from Everton

As reported by BBC, the Colombian footballer earlier travelled to Qatar for talks with Al Rayyan, which led to the rise of speculations about him exiting the Premier League side. Everton manager Rafael Benítez spoke about the player's exit after his side’s Carabao Cup loss to Queen Park Rangers on September 22. In the interview, Benitez said, "I don’t have too much information. I know that he is already there, but I don’t have much information. So maybe in the next couple of days, we will have more information or maybe tomorrow, I don’t know."

Rodriguez last appeared in a match in May 2021

James Rodriguez joined Everton after a transfer from Real Madrid in September 2020. He scored a total of 37 goals during his time with Real Madrid, in 125 matches. Although he made an impressive start to his stint at Everton, he has scored just six goals in 26 appearances overall.

He last appeared in the squad for the team's Premier League 2020/21 match against Sheffield United on May 16, 2021. In the 2021/22 season, he didn't appear in Everton's match against Aston Villa on September 18. While the coach cited that Rodriguez had muscular problems, it is was evident to the fans that the Colombian was not risking an injury ahead of his move to Al Rayyan. Meanwhile, Everton will play their next Premier League match against Norwich City on September 25.