Jadon Sancho transfer: The Borussia Dortmund winger has been heavily linked with Man United since last season and the Red Devils look set to confirm the deal. 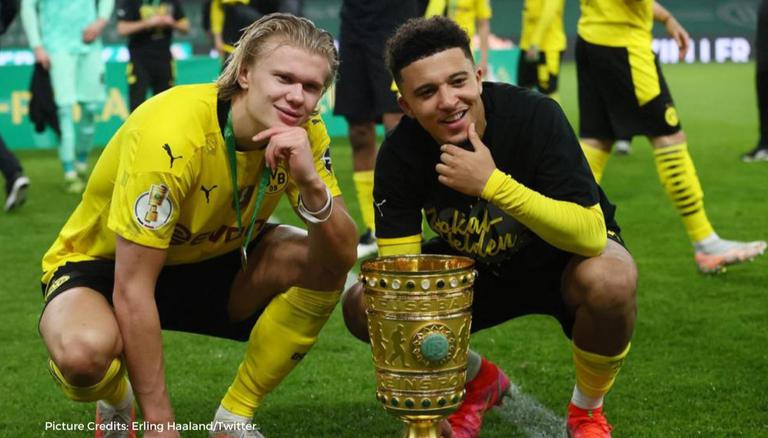 
The summer transfer window has kicked off and teams will now be in the pursuit to fill the missing pieces in their squads. Manchester United are one such team and they will be looking to add Borussia Dortmund star player Jadon Sancho to their ranks. The youngster has been a priority target for a very long time now and last year it looked like a Jadon Sancho transfer would happen, but after failed negotiations with the prices, Man United had to let go of the British international.

United finished 2nd on the points table and looked solid all year. But they will be hoping to add more firepower to the team to compete for trophies. Jadon Sancho to Man United looked to have been a done deal last year, but the Red Devils did not agree to the price Dortmund were asking for the winger. The German club decided on a 120 million euro price tag for Sancho, but the Premier League club kept negotiating and lost the chance to sign the talented winger. However, according to reports from The Athletic, it looks like a Jadon Sancho transfer is on the cards this season and it looks like he is heading back home to England after spending 4 seasons in Germany.

#MUFC pressing ahead with talks to sign Jadon Sancho. Hope rising a deal can finally be done with Borussia Dortmund.

But there is a gap on valuation, of around £20m as Dortmund stick closer to last summer’s price than expected. Add-ons discussed.https://t.co/JtvOtihEF8

Man United are ready to offer 80 million euros for the player but Dortmund will be looking for 20 million euros as add ons on the original Jadon Sancho price. According to The Athletic, Man United will also be signing a defender this transfer window. The club has been linked with players like Pau Torres and Raphael Varane, any one of these additions will be a big boost to the Red Devils' defence. Talks with Kieran Trippier are also ongoing and it could be possible that the former Tottenham player makes his way to Manchester. After signing veteran players like Alex Telles and Edinson Cavani last season, Man United will be hoping to add some youthful firepower to help bolster their squad, and if they manage to secure some of the names in this list, they can definitely have a brilliant chance of winning silverware next season.

Words can’t describe this feeling! 🏆 @DFB_Pokal WINNERS! This is for you guys @BVB pic.twitter.com/j8ujmcMQpm

Since his arrival in Dortmund, Sancho has been sensational. The 2019/2020 season was a breakout year for the winger and he attracted a lot of attention that season as he went on to score 17 goals in 32 appearances for Dortmund. He started this season slowly, but later picked pace and began performing at the top level, helping Borussia Dortmund win the DFB-Pokal Cup. He made his England debut in 2018 and has been capped 18 times by the Three Lions.