Kieran Trippier landed awkwardly off pitch and signalled that he needs treatment for his shoulder during opening minutes of Valencia vs Atletico Madrid match. 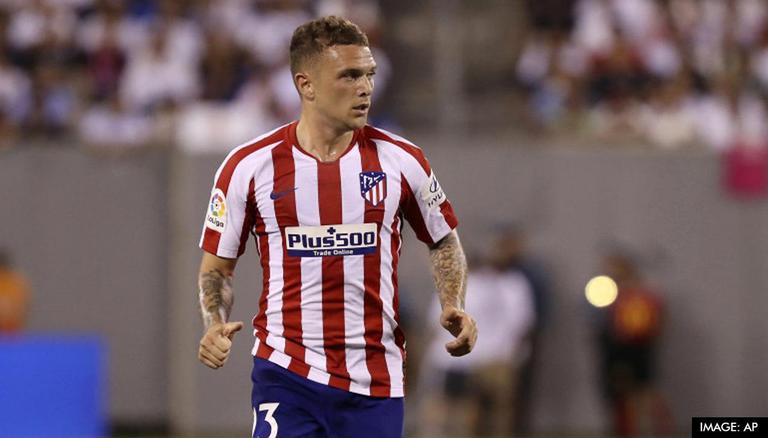 
Atletico Madrid's chance of climbing the LaLiga points table suffered a blow following a 3-3 draw against Valencia on Sunday. Despite leading the match 3-1, Atletico Madrid conceded two goals in the second-half stoppage time which was scored by Hugo Duro. Apart from dropping two points, Diego Simione's team also suffered a major blow with right-back Kieran Trippier suffering a major injury during the match.

The incident happened in the 5th minute of the match when Valencia midfielder Helder Costa barged into Kieran Trippier near Atletico Madrid's corner flag while chasing after a loose ball. The England defender landed awkwardly off the pitch and signalled that he needs treatment for his shoulder. Kieran Trippier was immediately replaced by Sime Vrsaljko in the match. Following the completion of the match, Atletico Madrid provided an update on Kieran Tripper Injury stating that the player underwent tests in hospital, which ruled out the bone injury but suffered a left acromioclavicular subluxation.

📋 After being taken to hospital and undergoing tests, Trippier's bone injury has been ruled out. The Englishman suffers a left acromioclavicular subluxation.

Atletico Madrid striker Luiz Suárez opened the scoring for the team from inside the area in the 35th before Valencia equalized with an own-goal by Atlético defender Stefan Savic in the 50th minute. Antonio Griezmann put Atlético Madrid ahead again in the 58th after a run from behind the midfield line that ended with a nice strike into the top corner, and Vrsaljko who came in for Kieran Trippier netted the third two minutes later from close range after a video review.

Valencia threatened with Daniel Wass hitting the crossbar in the 63rd, then sealed the comeback with Duro scoring from near the penalty spot in a breakaway and then with a header off a late set-piece. A victory for Diego Simeone's men in the Valencia vs Atletico Madrid match would have seen them go up to second in the La Liga points table but instead, the team are currently on the fourth spot with 23 points and four behind current La Liga leaders Real Madrid after 12 matches. The draw sees Valencia moved up to the 10th spot with 17 points.