Lionel Messi Joining Paris Saint-Germain Would Have Been A Dream: Leandro Paredes

Leandro Paredes has said that it would have been a dream if Lionel Messi had joined Ligue 1 outfit PSG however now hopes Messi is happy which ever team he's at. 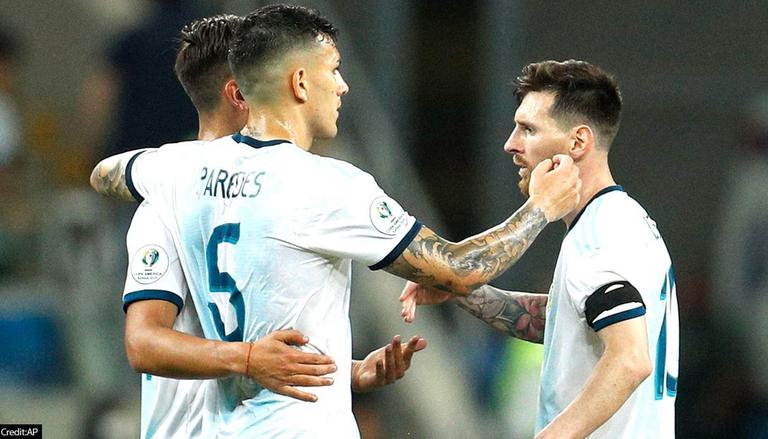 
Lionel Messi joining Paris Saint-Germain was a 'dream', believes fellow Argentine teammate, Leandro Paredes, as the deal for Leo 'didn't happen'. On July 14 it was reported that Argentina striker Lionel Messi is all set to sign a new five-year contract with Football Club Barcelona. And according to a report by Goal.com Messi will be taking a 50% wage cut and set to extend his contract with Barcelona until 2026 from what he was previously earning at the club.

"Yes there was a lot of talk at the club when it emerged that Leo could come to Paris," the PSG midfielder told ESPN. "It was a dream to imagine he could be with us next season. But hey, that didn't happen. I hope he likes where he plays."

Messi became a free agent on July 1 after his contract with Barcelona expired but the club seems to have still not given up on offering him a two-year deal with the same wages as the last contract. Messi's last contract was valued at more than €500 million over four years, including signing-on fees, bonuses, and his weekly salary.

According to FC Barcelona President Joan Laporta, the new contract talks with Lionel Messi are "progressing adequately" as the Catalan giants hope to secure Messi's signature as soon as possible.

Messi has managed to score 38 goals in 47 matches while also providing 14 assists for Barcelona in the 2020-21 season, including 30 goals in La Liga that helped him pick up the Pichchi Trophy, which is awarded to the highest goalscorer of La Liga.

Leo Messi also managed to score four goals and five assists for the national side at Copa America.

His renewal - which strictly speaking would now be a signing - with the Catalan club has still not been confirmed, but, after months of speculation, it does now seem to be on course for a happy ending for Barcelona fans.

The team however will be hoping his contract situation is sorted out as soon as possible, having lost out on the La Liga title last season to Atletico Madrid. Their opening game of La Liga is a tricky home match against Real Sociedad on August 16, 2021, and they will definitely want to get off to a strong start with Messi leading the ranks.