The caricature depicts three burqa-clad women wearing Lionel Messi shirts, with a text in French that translates to, "The Taliban, they are worse than we think. 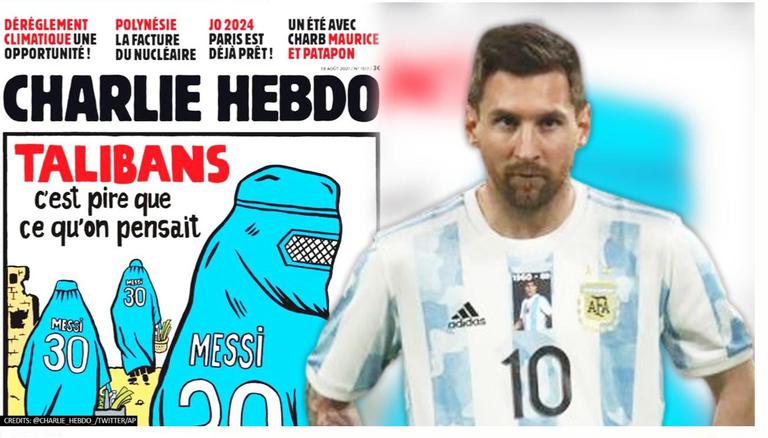 
As Argentina football megastar Lionel Messi looks forward to donning the Paris Saint Germain (PSG) jersey, he has been featured in a controversial cartoon published by French magazine Charlie Hebdo.

Charlie Hebdo, a popular French satirical magazine, in its latest edition has come up with a cartoon that features Messi. The caricature depicts three burqa-clad women wearing Lionel Messi shirts, with a text in French that translates to, "The Taliban: they are worse than we think."

The image was posted by Charlie Hebdo on the magazine's official Twitter handle.

The cover comes in the wake of the Taliban's violent takeover of Afghanistan recently. The longstanding war in Afghanistan reached a watershed moment on Sunday when Talibani insurgents closed in on Afghanistan's capital Kabul and forced the government to hand over power.

Lionel Messi has signed a two-year contract with PSG reportedly worth €35 million per season, including bonuses and an option to extend it to June 2024. He had landed in the French capital, Paris last week where he addressed a press conference as he is all set to begin his next phase of life with the nine-time Ligue 1 winners.

READ | 'Messi will continue to rise with the quality of players at PSG', says Angel Di Maria

The 34-year-old was last seen in action during the Copa America 2021 final against arch-rivals Brazil at the historic Maracana Stadium in Rio de Janeiro on 11 July this year. Winger Angel Di Maria scored the lone goal in the match as 'La Albiceleste' won their record 15th Copa America title. Argentina lifting the prestigious trophy also broke Lionel Messi's jinx of not winning an international title for the country. Argentina had lost to Brazil in the 2007 edition of the South American tournament that had featured a young Lionel Messi who was yet to attain fame and fortune.

Messi then led Argentina to three finals only to finish second-best on each occasion. These included the FIFA World Cup 2014 (lost to Germany at extra-time), and consecutive losses to Chile in the 2015 and 2016 editions of the Copa America.