Jaime Redknapp challenged Liverpool legend and current Rangers manager Steven Gerrard to name six players who made him fall in love in football.

Liverpool legend Steven Gerrard named the six footballers who motivated him during his childhood days. Steven Gerrard spent his whole career playing for Liverpool. Coming through the ranks at Liverpool, Gerrard went on to establish himself as one of the greatest midfielders in the sport, with the likes of Zinedine Zidane and Frank Lampard regarding him as the best midfielder during their careers. While Zinedine Zidane and Frank Lampard have already bestowed him with praise, Steven Gerrard has now repaid that praise by listing the six football players that made him fall in love with the sport.

Players who made Liverpool's Steven Gerrard fall in love with football

Former Liverpool player Jaime Redknapp challenged Steven Gerrard to name his six childhood influences who made him fall in love with football. The Liverpool legend had his answers ready. Steven Gerrard, while responding to Redknapp's challenge, uploaded an Instagram story naming his favourite six. 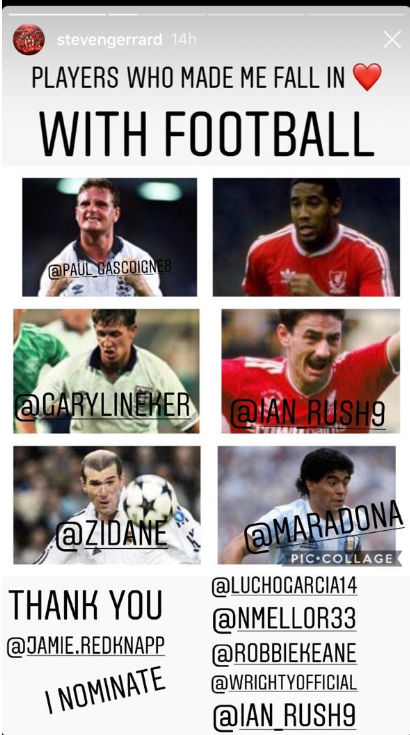 Also Read | ON THIS DAY: Maradona Suspended By Italian League After Positive Cocaine

A player who gave his all for the club and shirt . Passion , desire , commitment, are a few words that spring mind , a great professional with an attitude that is an example to young aspiring players and those around him . I wish you all the luck in your future at Lazio . Thank you for being a great servant to LFC . YNWA @leivalucas ðŸ™ŒðŸ‘