Luka Modric Contract: How Much Money Will The Croatian Maestro Earn At Real Madrid?

Luka Modric contract extension: The Real Madrid midfielder will stay at the club until 2022 after extending his current deal by a year. 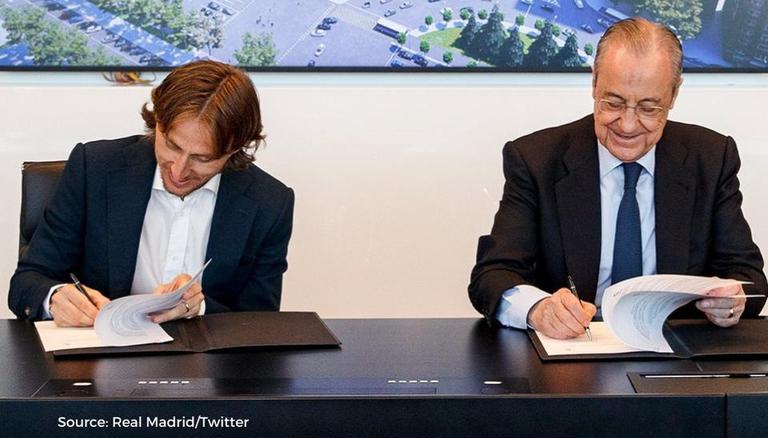 
Real Madrid and Luka Modric have agreed on a new one year deal that will see the 35-year-old stay in the Spanish capital until 2022. The Croatian maestro has been at the Santiago Bernabeu since the 2012 season and has been an instrumental player for Madrid in the midfield. With the Madrid star having signed a new contract, here is a look at the Luka Modric contract details.

The fine performances of Luka Modric this season have convinced Real Madrid to add a further year to his current deal. Los Blancos have spent several months working on sealing Modric's contract extensions. On the other hand, Modric has always wanted to continue playing for Zinedine Zidane's team, and as a result, he has also accepted a salary reduction proposed by the club to help ease some of the financial troubles caused by the coronavirus pandemic.

Real Madrid confirmed the Luka Modric contract extension on their official website as the midfielder signed the contract alongside club president Florentino Perez. Following his signing, Modric was presented with a jersey with his name and the number 2022 on the back, indicating that he will remain at the club until 30 June 2022. While the latest Luka Modric salary details are not available yet, the Croatian maestro is believed to have earned a staggering £20,176,000 per year at Madrid on his previous deal.

Luka Modric has become a fan favourite at Real Madrid ever since his arrival from Tottenham in 2012 for €35 million. The Croatian maestro has played 383 games for Los Blancos and has scored 26 goals and provided 61 assists. Modric has won four Champions Leagues, two LaLiga titles, one Copa del Rey and four Club World Cups. Moreover, Modric also won the Ballon d'Or in 2018 after winning the Champions League with Madrid and finishing runners up in the World Cup with Croatia in the same year.

With the Luka Modric contract extension confirmed all eyes will turn to Real Madrid captain Sergio Ramos. The Spanish centre back has been expected to sign a contract extension for a while but Perez has insisted that the situation is different to Modric's. When asked why no agreement had been reached so far, the Madrid supremo said, "I don't know why we haven't. We have spoken many times. I don't want to blame anyone."

Perez added, "I love Ramos as though he was my son, I've done for him all that I can. I recognise all that he has done. But you [reporter] are not going to encourage me to pay Sergio Ramos more. The situation is what it is, he knows it, too. Let's complete the season and see what happens. Once the season is over, I have to see what will happen next season, which will be worse than this one, if COVID-19 continues." Considering Perez's statement it seems a Sergio Ramos exit is certain if the centre back does not compromise on his wage demands as Madrid's financial situation seems precarious.