The Man City ban left the vast majority of the Man City fanbase furious with the Champions League ban. Oasis frontman Liam Gallagher was one among those.

Mancunian native and Oasis frontman Liam Gallagher has long professed his unwavering support for the club he grew up watching - Manchester City. However, Liam Gallagher, like most Man City fans, has been left infuriated by the Man City ban which, as it stands, will mean that the club will not feature in the next two editions of the UEFA Champions League. The Oasis frontman has taken more than umbrage at the Man City ban and made it evident on Twitter earlier this week. 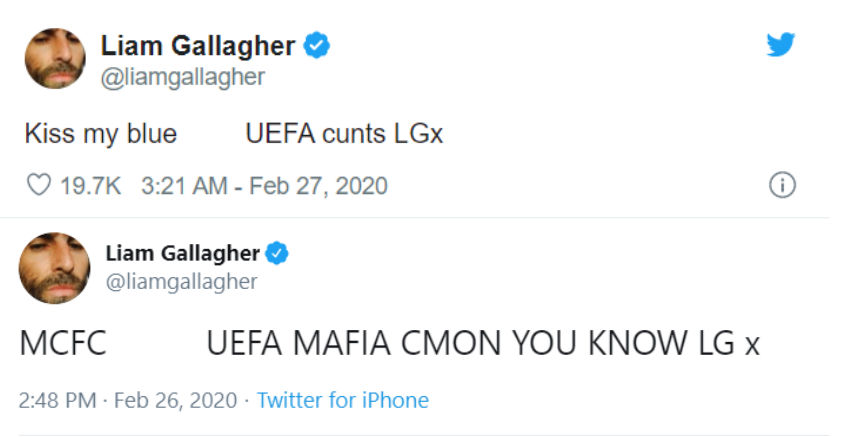 Man City were fined a total of £25 million for breaching UEFA's Financial Fair Play (FFP) regulations after a series of leaked emails were published by a reputed German publication. The leaked emails detailed how Man City circumnavigated FFP rules and regulations and reportedly falsified their financial reports to show that all was well with the club when it came to their finances. The Man City ban will be contested by the club when Manchester City take their appeal to the Court of Arbitration for Sport (CAS).

For Oasis frontman Liam Gallagher and the rest of the Man City fanbase, it could prove to be a long wait as the date for the hearing at CAS has not yet been declared. There is a possibility that the ban from the UEFA Champions League will be suspended until the two parties come to a conclusion in the issue. As things stand, however, there have been rumours that the Premier League could follow in the steps of UEFA and choose to retrospectively dock points from Manchester City in a couple of their title-winning campaigns.

The first English side to win at the Bernabeu in 11 years...

Elsewhere, Man City put the dark cloud of the Champions League ban behind them when they made the trip to the Santiago Bernabeu this week. With a 2-1 victory in Madrid, Pep Guardiola's side have not only placed themselves in pole position to advance to the quarter-finals but have also become the first English side in 11 years to register a victory against Real Madrid at the Bernabeu. With Leroy Sane returning from injury and Sergio Ramos suspended for the second leg, it will be interesting how the second leg at the Etihad shapes up for Zinedine Zidane and Pep Guardiola.