As the opening weekend of the Premier League 2021 ended, Manchester City fans clashed with the stewards following their defeat to home-team Tottenham Hotspurs 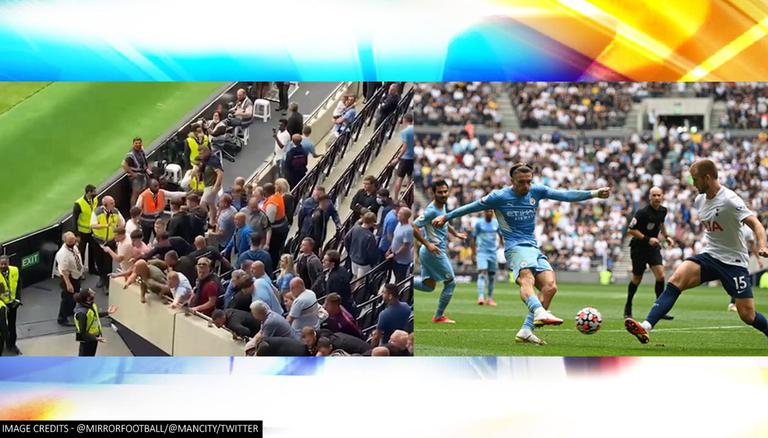 
Crowds returned to the stadiums in full capacity for the first time since March, as the Premier League 2021 season kicked off on August 14. On matchday two, Manchester City suffered a defeat on their season opener at the hands of Tottenham Hotspurs, thanks to the strike by Heung-min Son. Following the loss, few supporters of the visiting team, Manchester City were spotted having a heated conversation with the stewards at the Tottenham Hotspur stadium at the end of the match.

In the match, Tottenham Hotspur head coach, Nuno Espirito Santo, earned his first Premier League win. Defending champions Manchester City dominated the first half of the match but couldn't find the goal, as Fernandinho and Riyad Mahrez failed to convert the opportunities they got into goals. Meanwhile, the home team carried the threat on the break and took the lead of the match, 10 minutes after the restart. Son Heung-min scored a brilliant strike at the 55th minute into the bottom left corner after Steven Bergwijn had created the opening. Bergwijn also had a chance to double the lead but put the ball wide. Manchester City's Ferran Torres and the £100million new signing Jack Grealish, making his debut, also had shots at the goal but were denied by Hugo Lloris.

This was the first time since 2008, that Manchester City lost the opening match of their season. Tottenham Coach, Nuno Espirito Santo, in the post-match conference with Sky Sports shared his thoughts on his maiden win as the team’s coach. Praising the team for a solid start he said, “It was strong. We were lucky because they had chances but the boys held on and they stayed in the game. We knew it would be tough. After that first 20 minutes we did better and we started getting our chances. In the first half we didn't finish so good. When we should have shot on goal we didn't do it. In terms of shape and our organisation the front three worked very hard and closed the gaps. It's very difficult to play against City with the way they build the first moment from the back four and Fernandinho. It requires a lot of discipline so the boys did OK”.