REVEALED: What Happened Between Vinicius Jr & Richarlison Before Japan Vs Brazil Friendly?

Neymar Jr, Lucas Paqueta, and Dani Alves were seen attempting to separate Vinicius Jr and Richarlison while they were holding each other's shirts. 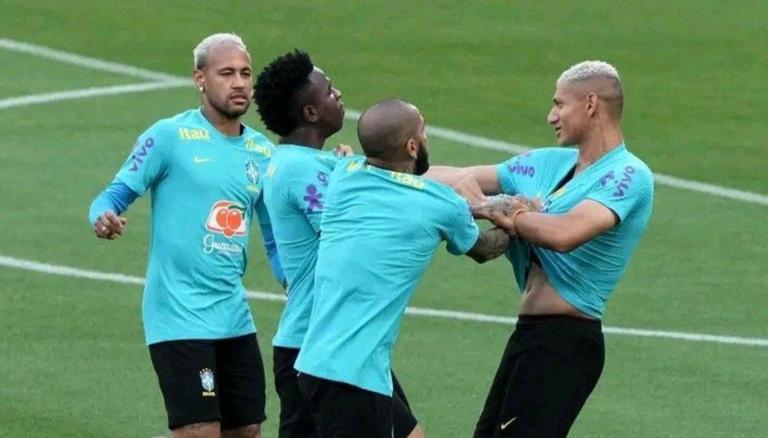 
Brazilian internationals Vinicius Jr and Richarlison are said to have gotten into a furious altercation during a training session ahead of their friendly against Japan. In footage and photographs that went viral after the incident, the two forwards were seen ripping one other's shirts while their teammates tried to separate them. Neymar Jr, Lucas Paqueta, and Dani Alves were seen in one of the images attempting to separate the duo while they were holding each other's shirts.

However, it has been revealed that the duo were only involved in a friendly scuffle when Richarlison was trying to avoid 'ear-flicking' by his teammates.

What happened between Vinicius Jr and Richarlison? 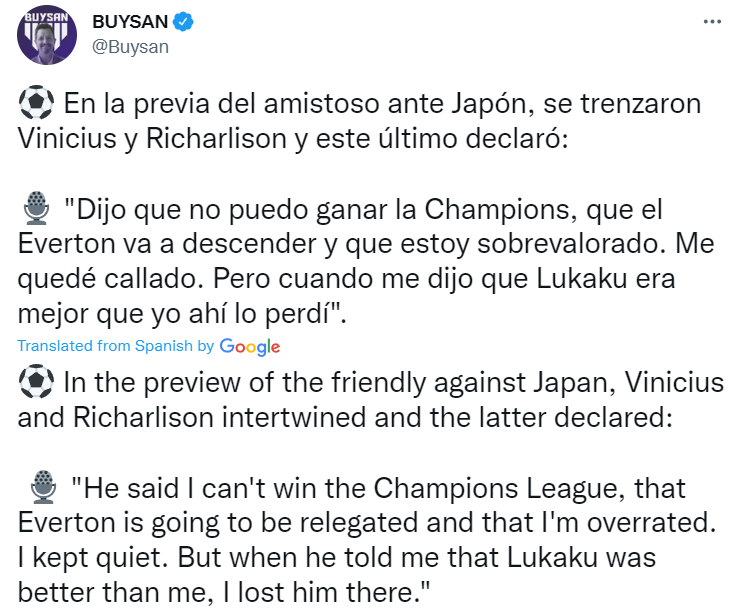 However, it has also emerged that no such brawl occurred between the two players and that the photographs of them fighting that went viral were simply part of friendly banter in which the winning team in a training session gets to do an ear flick on the losing team's members. The photos show Richarlison trying to avoid the earflick from Neymar, Vinicius, Alves, and Paqueta, who were reportedly part of the winning team during the training session.

READ | Casemiro on 'outstanding' Vinicius, and Ecuador challenge in WCQ

According to reports, Vinicius Jr will join Real Madrid after the friendlies, while Richarlison will continue to hunt for a club to join once as he is expected to leave Everton ahead of the next season. Richarlison has reportedly expressed his intention to depart Everton.

Brazil are currently participating in a series of friendly matches in order to prepare for the upcoming 2022 FIFA World Cup in Qatar. The Canaries won 5-1 against South Korea in their first friendly game and then defeated Japan 1-0 on Monday. Brazil will host Argentina on Saturday for their final international friendly ahead of the World Cup. Brazil have not won a World Cup for 20 years despite being one of the best international teams in the world.