Robert Lewandowski Speaks Up Against Biennial FIFA World Cup: 'It's Impossible To Play'

Bayern Munich star forward Robert Lewandowski has spoken up against having a FIFA World Cup every two years joining a long list of people against it. 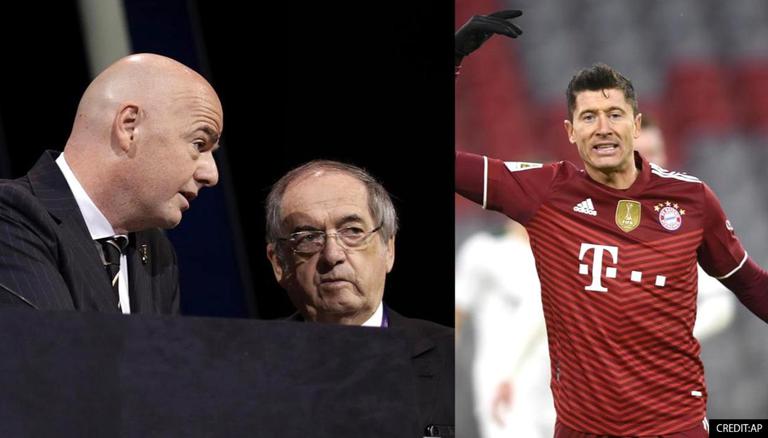 
FIFA has been contemplating the concept of holding a World Cup every two years and some of the topmost sporting organizations in the world like UEFA, and even the International Olympic Committee (IOC), and others have voiced their concerns against a biennial World Cup. But it seems like the president of FIFA Gianni Infantino is adamant about sticking with the plan to host the World Cup every two years as he now claims that apparently 'younger generations' want a World Cup more often than the current format of having one every four years. Now, Bayern Munich star forward Robert Lewandowski has spoken up against having a FIFA World Cup every two years.

The star striker spoke about player fatigue and a drop in the intensity of the way players play matches. He said that they already have so many games every year. He then added that if the spectators want something 'special' then they need to give the players a little bit of a break. He also said that if they want the players to play a FIFA World Cup every two years then expect the level of the matches to go down.

"We have so many games, so many tough weeks every year. Not only the games but preparation for every single match, every preseason, every tournament. If you want something special, something different, we need a break. It's not enough if we get two or three weeks in every summertime. If we want to play a World Cup every two years the expectations should be that the time for the players spend at a high level will go down. Perhaps to five, six or seven years," said Lewandowski as quoted by ESPN.

"Otherwise, it's impossible: not only for the body but for the mentality as well. If you want to play (high-level) football for over 10 years in your career, then you need the breaks. It's impossible to play a World Cup every two years and get high performance. Players need downtime, to relax," said Lewandowski as quoted by ESPN.

Robert Lewandowksi is not the only one against the idea of having a World Cup every two years, even huge organisations and associations like the International Olympic Committee and UEFA are against it. Responding to a letter to a fans group Football Supporters Europe, UEFA president Aleksandr Ceferin said that UEFA and its national associations also have serious reservations and grave concerns surrounding reports of FIFA’s plans. The letter then reads that the proposal was not presented to any of the confederations, national associations, leagues, clubs, players, coaches, clubs, and all the football community. It further gives an explanation that it is imperative to highlight the concerns shared across the footballing world regarding the impact a biennial FIFA World Cup would have on the international match calendar and, prominently in this context, on women’s football. Finally, the letter goes on to say that UEFA stands with the fans on this issue and that everyone must work together on such an important issue.

Even though IOC President Thomas Bach said a month ago that they will not interfere in the decision, the IOC had then released a statement against FIFA's plan of hosting a biennial World Cup. In the statement, they cite the numerous oppositions that FIFA have faced and that the IOC also share the same reservations. The IOC gave several reasons for the call for 'wider consultations'. They said that the increased number of World Cups would create a clash with other major international sports and also cited the impact it could have on the health of the players.