Sergio Aguero Contract: How Much Will Barcelona Pay The Argentine Forward?

Sergio Aguero contract: Barcelona have confirmed the signing of Manchester City legend Sergio Aguero as the Argentine returns to LaLiga in different colours 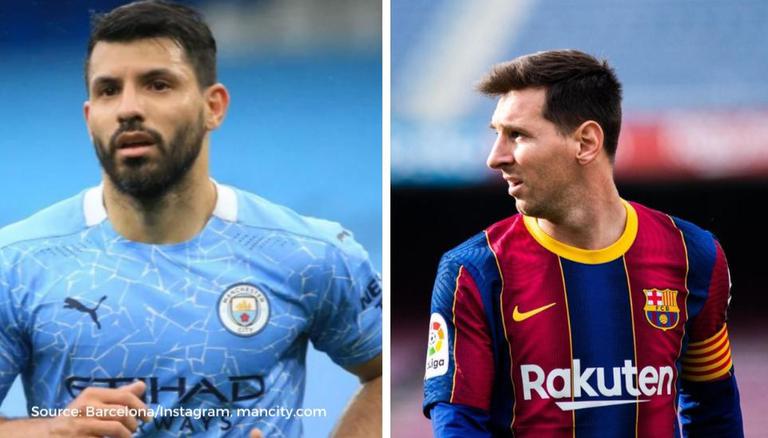 
Sergio Aguero's departure from Manchester City was confirmed earlier this season and it seems that the Argentine striker has decided upon his next move. Sergio Aguero Barcelona transfer has been confirmed, marking the end of his legendary stay in the Premier League and return to LaLiga where he once played for current champions - Atletico Madrid. Here is a look at the Sergio Aguero contract and how much will Sergio Aguero earn at Barcelona as fans are curious to know about the striker's deal.

LaLiga giants FC Barcelona have finallised the signing of Sergio Aguero on a free transfer this summer. Barcelona have offered the Manchester City legend a two-year contract and the Argentine star arrived at the Camp Nou after the UEFA Champions League final between Manchester City and Chelsea on May 29. It is believed that Aguero, who turns 33 next month, has agreed to considerably reduce his wage demands and will join as a free agent once his Man City contract expires on June 30.

According to media reports, Barcelona have tabled a €5 million per year (£4.3m per year) Sergio Aguero contract, which will keep the Argentine striker at the Camp Nou until 2023. This is believed to be a staggering 58.3 % reduction in salary compared to the €12 million he earned at Manchester City. There is a buyout clause set at €100m in Sergio Agüero’s contract with Barcelona until June 2023.

READ | Sergio Aguero gets this incredible gift from commentator Martin Tyler to celebrate 93:20

However, after receiving less game time at City due to various injuries to both his thigh and knee it seemed that Aguero was required to compromise on his wage demands.

Barcelona have been looking for a striker ever since Luis Suarez's departure to Atletico Madrid last summer. Although club president Joan Laporta was interested in acquiring Borussia Dortmund's Erling Haaland, it was impossible to sign the Norwegian considering Barcelona's poor financial situation. However, Laporta sees Aguero's arrival as a great opportunity to keep hold of Lionel Messi, who has often been linked with a move away from the Camp Nou in recent times. It is also believed that a Sergio Aguero Barcelona move could have taken place in 2014 before the LaLiga giants opted to acquire Suarez.

Sergio Aguero will join Barcelona at the end of June.

During Sergio Aguero's time at Man City, there may only be a few records that he has not broken. The Argentine striker is the highest scoring overseas player in Premier League history with 182 goals. This goal tally also makes him the fourth all-time Premier League goalscorer and he is only one goal behind Manchester United's Wayne Rooney (183) when it comes to goals scored for a single club. As a result of such a glittering career, Manchester City gave him a great tribute after the final home game of the Premier League season against Everton. Sergio Aguero came off the bench and scored a brace to mark his last game at Etihad. However, his final game in Man City colours wasn't what he'd hoped for as Chelsea beat Manchester City in the 2021 Champions League final.