Real Madrid goalkeeper Thibaut Courtois expressed his disappointment over the treatment meted out to Liverpool fans ahead of the UEFA Champions League final. 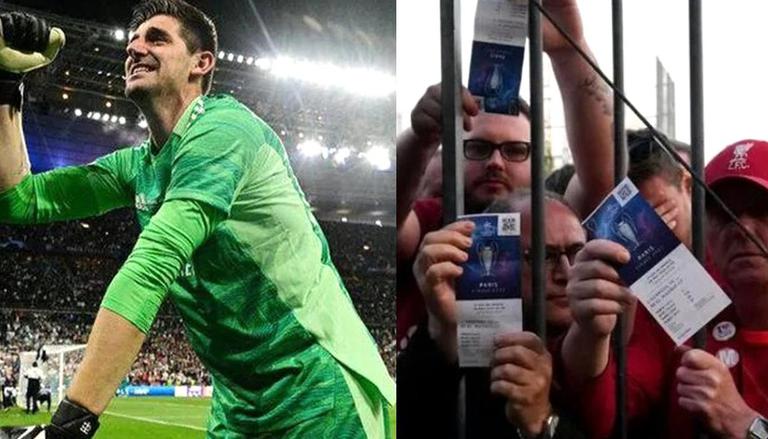 
Real Madrid goalkeeper Thibaut Courtois has expressed his disappointment over the treatment meted out to Liverpool fans ahead of the mega UEFA Champions League final at the Stade de France. With some fans attempting to get inside the stadium with 'fake tickets', the French police fired tear gas at some of the supporters who tried to get inside the stadium by climbing over security banners.

While UEFA has issued a statement regarding the same, former football Gary Lineker has referred to the incident as 'shambolic' and 'dangerous'.

While Thibaut Courtois simply took to his official Twitter handle and stated that he felt 'sorry for Liverpool fans' for the way they were treated, Gary Lineker slammed UEFA for the way the situation was handled. The 61-year-old took to Twitter and posted several posts and also a video of a reporter explaining the situation outside the stadium once the situation had calmed down.

I feel sorry for @LFC fans and the way they were treated. I hope everyone got home safe!

I’m not sure it’s possible to have a more poorly organised event if you tried. Absolutely shambolic and dangerous. @UEFAcom

What summed up the out of proportion reaction, aside from pepper spray and tear gas, was that with a few minutes of the game remaining a police cordon appeared only at the Liverpool end. This despite the fact there was not a scintilla of trouble or threat amidst the crowd.

This is good accurate reporting. It was shambolic. The unnecessarily poor treatment of people peacefully going to watch a football match was awful & unjustified. I saw no behaviour from Liverpool fans that warranted the police reaction. Just fearful fans wanting to see a game. https://t.co/SnvBbUGxr6

UEFA released a statement after the Champions League final between Liverpool and Real Madrid was delayed by at least 30 minutes to allow fans with genuine tickets to get inside the stadiums. The complete statement read,

"In the lead-up to the game, the turnstiles at the Liverpool end became blocked by thousands of fans who had purchased fake tickets which did not work in the turnstiles.

This created a build-up of fans trying to get in. As a result, the kick-off was delayed by 35 minutes to allow as many fans as possible with genuine tickets to gain access.

As numbers outside the stadium continued to build up after kick-off, the police dispersed them with tear gas and forced them away from the stadium.

UEFA is sympathetic to those affected by these events and will further review these matters urgently together with the French police and authorities, and with the French Football Federation."

While UEFA explained the situation from their perspective, there was a Liverpool supporter, Colm Lacey, who told AP, "People started jumping the queue, then they ripped the gate open and then there was a push". Meanwhile, another fan, Angela Murphy added, "I’ve got really bad asthma and I’ve been tear-gassed twice. I’m really struggling."

READ | UEFA Champions League Final 2022: How much have Real Madrid & Liverpool earned each?

Murphy, when asked about the use of tear gas at supporters, replied, "Nothing, we’re stood here. There was nothing. It’s just been horrendous. We have been well behaved."