Vinicius Jr's goal was enough to see Real Madrid edge out Liverpool 1-0 in Paris. The UEFA Champions League title was the 14th crown for Los Blancos. 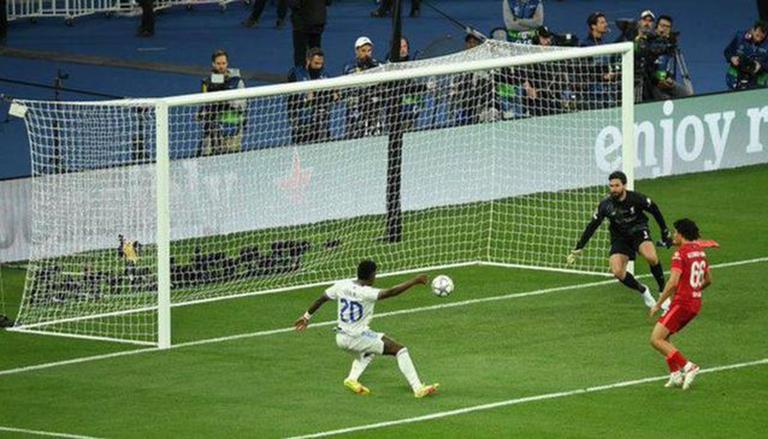 
Vinicius Jr's UEFA Champions League season had a fairytale ending with the Brazilian youngster scoring the match-winning goal just before the hour mark. Vinicius' goal was enough to see Real Madrid edge out Liverpool 1-0 in Paris. The UEFA Champions League title was the 14th crown for Los Blancos. On the other hand, Liverpool had to contend with two domestic titles despite the team in contention for a quadruple through the season.

Liverpool hit the post in the opening session with Real Madrid goalkeeper Thibaut Courtois deflecting Saido Mane's shot. Real Madrid finally managed to break the deadlock with the first good chance in the second half. Valverde marched down the left with the ball and got it to the back post with an effort that almost looked like an errant shot, but Vinicius Jr ensured that he buried the ball into the empty net with Alisson, not in a position to stop it.

Its so nice to be a REAL MADRID fan!😊

A new trophy that rewards a hard collective and individual work. 🏆
Thanks to all Madridistas, the trophy is also yours ¡ 𝗛𝗔𝗟𝗔 𝗠𝗔𝗗𝗥𝗜𝗗! 🤍

Nice to see you again 🏆 pic.twitter.com/kl0adlP3xH

Real Madrid posted a video on their social media handle in which the team can be celebrating their victory in a spectacular fashion inside their dressing room. The video begins with the players jumping and cheering in celebrations, followed by a visual of Madrid manager Carlo Ancelotti and the support staff posing with the UCL trophy. Going ahead, Austrian footballer David Alaba shared his thoughts about the victory.

While players took turns with their champagne celebrations, Vincius Jr., the star of the night also shared his thoughts about the achievement. It was followed by veterans Luka Modric and Marcelo among the other players, posing with the trophy, showing a sign of ‘five’ with their fingers. It is pertinent to mention that Karim Benzema, Dani Carvajal, Isco, Nacho, Marcelo, Casemiro, Toni, Kroos, Gareth Bale, and Modric have all won five UCL titles now. The video continues with Marcelo sharing his thoughts about the massive win, having already announced that he has played his last game with the club. Shedding his thoughts about the win, he said, “The season was what it was and we've deserved it, this is a strange moment in my head”.