In the semi-final match of T20 World Cup, Australia defeated Pakistan and made its way to the final against New Zealand, scheduled to take place on Nov 14. 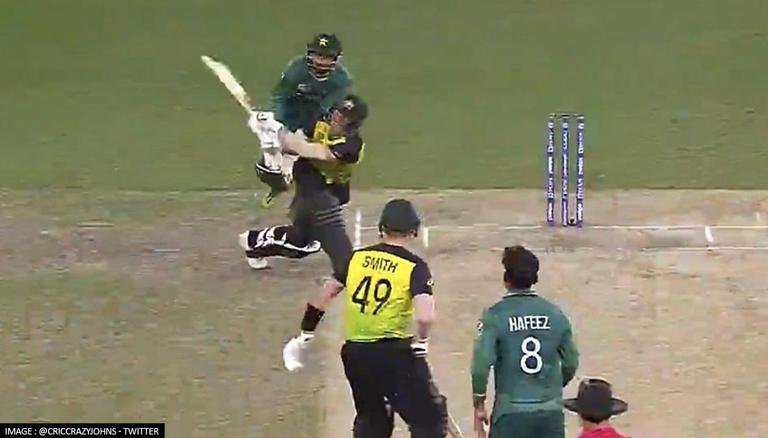 
What may very well be called the 'moment of the semi-final match' between Pakistan and Australia, Pak's Mohammad Hafeez mis-bowled a delivery which bounced twice and still failed to reach the man at the crease, David Warner. Not one to let a good opportunity pass him by, Warner danced down the track and chased the ball, smashing it for a massive six. To make it all the more worthwhile, the Umpire inevitably raised his arm at shoulder height and declared it a 'no-ball'.

Netizens shout 'shot of the match'

David Warner's shot at Mohammad Hafeez's delivery did not go unnoticed, and in fact, invoked reactions from Netizens. While one called it 'shot of the tournament', the other gave 'full marks' to the Australian batsman. Few others underlined that unlike 'rockstar Warner', many batsmen would have just 'let the ball go'.

shot of the tournament?? pic.twitter.com/yFXAHRWUaS

One of the funny moments from the T20 World Cup 2021 - the awareness of Warner was brilliant. pic.twitter.com/jli3ziYv3C

That's like a rockstar, warner. Some dumb batters would've left it.

No 'SpIrIt oF cRiCkEt' debate there after what Warner did to the Hafeez delivery?

After winning the toss in the semi-final match of the T20 World Cup, Australia chose to bowl first and left the batting for Pakistan to do. Pakistan's opening batsmen Mohammad Rizwan and Babar Azam, later supported by Fakhar Zaman, managed to take the country's score in the match to 176. With a target of 177 to win the match, Australia's opening batsman David Warner with 3 fours and 3 six was alone able to make 49 runs. Mitchell Marshal scored 28 runs, but a major part of the target was covered by Marcus Stoinis and Matthew Wade, who stayed at the crease till the end, hitting multiple sizes and fours and taking Australia towards victory with one over still to go.

With this victory, Australia becomes the next finalist in the ICC T20 World Cup 2020. New Zealand had earlier secured a place by defeating England.