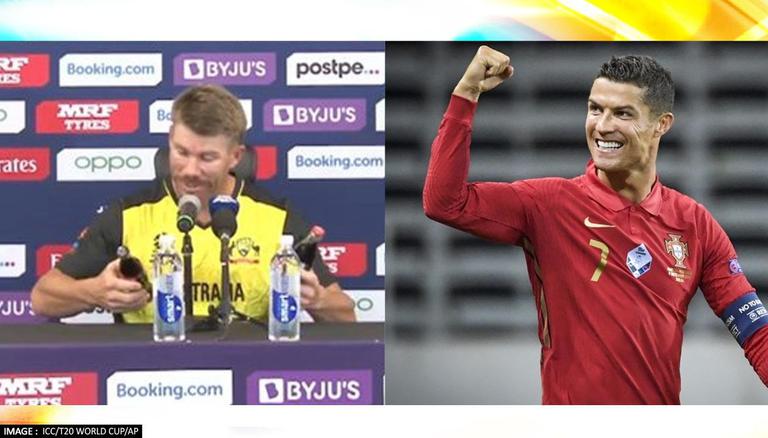 
Explosive Australian batter David Warner seems to have rediscovered his rhythm as he played a match-winning knock in his team's emphatic seven-wicket win over Sri Lanka during their ICC T20 World Cup 2021 Super 12 clash against Sri Lanka at Dubai International Stadium on Friday.

While David Warner's impactful knock helped the Aussies in registering their second straight win of the tournament, his performance during the post-match press conference is what stood out the most when he emulated football megastar Cristiano Ronaldo's act of removing Coke bottles that were placed on the table.

While addressing the media after Australia's seven-wicket win over Sri Lanka on Thursday, the southpaw recreated the 2016 Euro Cup winner's $ 5.2 billion stunts by trying to remove both the Coca-Cola bottles placed near him. However, he ended up leaving two water bottles on the table. The stunt was reminiscent of Cristiano Ronaldo who had famously taken away a couple of Coke bottles placed on the table out of the frame during a UEFA Euro Cup 2020 press conference in June this year. Lifting up a bottle of water, the five-time Ballon d'Or winner o said 'Agua’ in Portuguese, urging people to drink water instead.

Ahead of the post-match press conference, David Warner tried to move two Coke bottles placed on the table but let those two water bottles remain there and that is when one of the officials made his presence felt and said something to the opening batter after which he placed the bottles back on the table.

.@davidwarner31 trying to be @Cristiano

Meanwhile,  the video of Cristiano Ronaldo's health-conscious stunt had made rounds on social media and became viral in no time. However, it cost Coca-Cola a fortune as the soft-drink manufacturing firm reportedly ended up suffering a loss of $5.2 billion.

READ | India vs NZ, T20 WC: What is Hardik Pandya's record as a bowler in T20 Internationals?

Coming back to the contest, the 2014 champions were restricted to 154/6 from their 20 overs after being put in to bat by Australian skipper Aaron Finch. In reply, David Warner went after the Sri Lankan bowlers right from the word 'Go'. He scored a 42-ball 65 at a strike rate of 154.76 including 10 boundaries as the Aussies got over the line by seven wickets and exactly three overs to spare and by the virtue of this win, they also ended up registering their second consecutive win of the ongoing ICC T20 World Cup 2021.