Bharat Arun said that India may have underperformed because of having a strenuous year, having played the IPL and several other games before the T20 World Cup 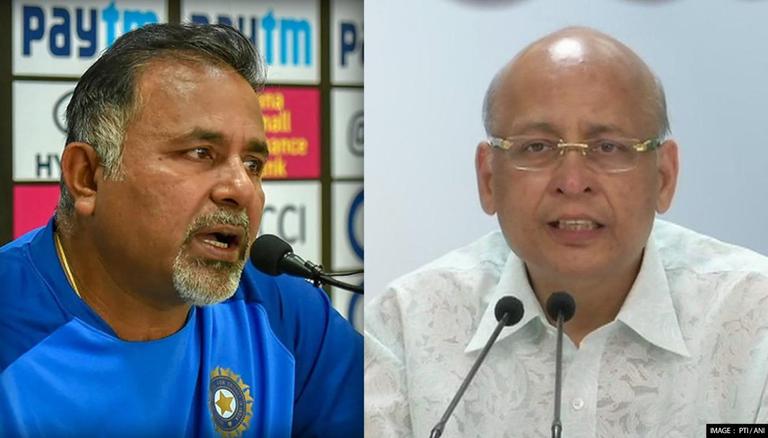 
India's bowling coach Bharat Arun gave potential reasons for the national side's below-par performances in the T20 World Cup 2021 on Sunday before New Zealand defeated Afghanistan to officially end the hopes of the Virat Kohli-led side of making it to the semi-finals.

Arun said that the Men in Blue may have underperformed because of having a strenuous year, having played the IPL before the T20 World Cup. Indian National Congress politician and top lawyer Abhishek Manu Singhvi has responded to the claims, calling them 'silly,' stating that players from other nationalities also took part in the same competition.

Abhishek Singhvi took to his official Twitter account to respond to Bharat Arun's claims about why India underperformed in the T20 World Cup. The Indian National Congress politician suggested the Indian bowling coach accept defeat with 'grace' and not give 'silly excuses' that 'players were tired after IPL.' He explained his point by stating that the likes of 'New Zealand, England, Australia and West Indies,' all played in the same competition before the T20 World Cup. Three of the teams other than the West Indies qualified for the semis even though several of their players played in the IPL.

Silly excuse by Bharat Arun that players were tired after IPL. New Zealand, England, Australia, West Indies all had players who played the IPL. India could have got no better advantage than to play in the venue of #WorldT20 , we should accept defeat with grace & move on.

T20 World Cup: Arun explains why India may have struggled

While speaking at a press conference on Sunday, Bharat Arun answered questions about India's below-par performance at the T20 World Cup 2021. "Ideally, a short break between the IPL and T20 World Cup would have been ideal. I am not giving any excuses. These players have been on the road for the last six months, and with the bubble life, it is never easy."

Indian players and other nationality players involved in the IPL

While all of Team India's squad members were involved in the IPL 2021, several stars from other nationalities also took part in the same competition. If the New Zealand squad were to be considered, skipper Kane Williamson led the Sunrisers Hyderabad side that exited the competition prematurely after scoring just six points in their 14 matches. James Neesham also played in the IPL 2021 and was a key player in helping the Mumbai Indians win their last two games. Trent Boult was also part of the same side and played an active role throughout the second leg of IPL 2021 in the UAE.

When it comes to England, several of their players were a part of some IPL franchise. Jason Roy played a crucial role for the Sunrisers Hyderabad and also carried on his form in the T20 World Cup 2021 before pulling his hamstring in the loss to South Africa on Saturday.

Eoin Morgan led the Kolkata Knight Riders to the final of IPL 2021 before leading his England side successfully to the semis. Perhaps the most active player from the England squad in both the IPL and the T20 World Cup 2021 was Moeen Ali. The English all-rounder played a vital role in helping the Chennai Super Kings win the marquee tournament and is now helping England with both bat and ball.

As for Australia, David Warner took part in the initial stages of the Dubai leg of IPL 2021 before he was dropped by the Sunrisers Hyderabad. Glenn Maxwell also played a critical role in the franchise league for the Royal Challengers Bangalore as he helped them reach the playoffs of the tournament. The other players to take part in both the IPL 2021 and the T20 World Cup 2021 include Steve Smith, Marcus Stoinis and Pat Cummins. However, it is important to note that the likes of Smith and Cummins did not play several games in the competition.